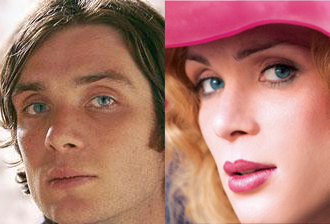 Whenever a male is turned into a female (or sometimes just when he dresses as one), he/she will almost always be extremely attractive, especially to members of his inner circle and close associates.

This may result in awkwardness for all concerned. The sex-changed character will often examine her new form and find it to be very... attractive. Only to promptly Squick herself out when she realizes what she's thinking. Attractive Bent-Gender operates in tandem with the First Law of Gender Bending to leave the world more attractive than it had been before. Or at least no less attractive. A handsome man may become a beautiful woman... but so will an unattractive man. In true Gender Bender or Easy Sex Change situations, one rarely encounters a handsome man who becomes an unattractive woman.

The trope may also apply to scenarios where a male is Disguised in Drag or crossdressing. Sometimes this is played straight, but (particularly when the crossdressing is Played for Laughs) it's often a case of Informed Attractiveness. In such scenarios, despite the "new woman" perhaps looking mannish and homely to the audience, someone will nevertheless be smitten with "her." Traditionally, this would be where Hilarity Ensues as the crossdressed hero tries to fend off the advances of an unwanted suitor. In more recent works, a hero who is Camp Gay may instead be delighted with the attention "she" is getting, and exploit the opportunity to fool around a bit, with no less hilarious results. For maximum Dramatic Irony in this case, the admirer is not unlikely to be some sort of Heteronormative Crusader. Either way, sooner or later, an Unsettling Gender-Reveal is likely to follow.

Of course, there's nothing stopping this trope from showing up when a female becomes male as well, it's just less common due to this sort of change being rarer overall. However, when it so happens that a woman falls for a Bifauxnen, she will only give up when the disguise is revealed or, these days, is liable to not care.

This trope is often a major part of how the Second Law of Gender-Bending operates. Compare Transgender Fetishization, for which this is usually a Required Secondary Power, where an attractive crossdressing or gender-bending character really enjoys his feminine attractiveness and sexiness, sometimes to excess. Sweet on Polly Oliver is a subtrope where a woman crossdressing is found attractive by straight guys. Frequently accompanies Old Friend, New Gender. See also Rule 63, which basically exists because of this trope. When they actually are both genders, it becomes Everybody Wants the Hermaphrodite. Compare Even the Guys Want Him and Even the Girls Want Her.

Contrary to stereotype, this can be Truth in Television, although it will usually be harder to pull off than in fiction due to the averages of sexual dimorphism

in stature, build, facial structure and other such factors between men and women in real life; if a man is pretty when made up as a woman, he is likely also a Pretty Boy to begin with. While many actual Drag Queens could probably be cited as straight (or more usually, gay) examples of the trope, such judgments would necessarily be subjective, as well as prone to attract controversy to the page. Therefore, No Real Life Examples, Please!

Cloud dressed up as a girl is so convincing Tifa can't even recognize him at first.

Cloud dressed up as a girl is so convincing Tifa can't even recognize him at first.