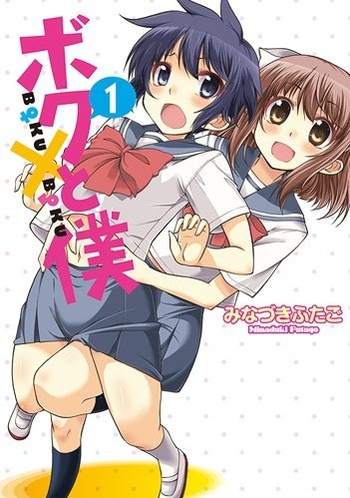 Yuuki is a tomboyish middle schooler who often gets mistaken for a boy. While on the train one day Yuuki ends up harassed by a chikan. She ends up rescued by a similarly-aged girl. While out together, Yuuki finds out that her savior is actually a crossdressing boy named Junichirou Izumi. His mother runs her own clothing brand and as a result Jun has gotten into crossdressing. Yuuki and Junichirou quickly end up becoming friends.
Advertisement:

Boku to Boku is a comedic Otokonoko Genre manga about a tomboy who wishes she could be girlier, her crossdressing best friend, and their adventures together. It ran for 2 volumes.

Boku to Boku contains examples of: