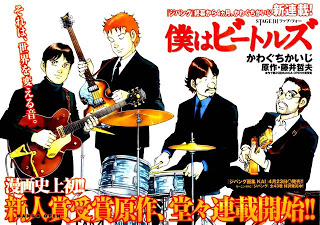 The story revolves around Japan's best Beatles tribute band, The Fab 4. Within years of forming, they receive a record contract with Roppongi Revolver, Japan's mecca for Beatles fans, and are chosen to perform at a Beatles convention in Liverpool.

However, their rhythm guitarist, Rei Takatuka, begins to become more distant with the others, and the band members are on the verge of breaking up. After their final performance, the band's lead guitarist, Makoto Hatomura, attempts to persuade Rei to rejoin to follow their dreams. Rei refuses and Makoto pushes him onto an incoming train, Shou Hachiya, the band's bassist, tries to stop Makoto and all three fall onto the track.

Shou and Makoto wake up and discover that they have traveled back in time to 1961, a year before the Beatles hit the big time. The two then decide to take up the mantle of the Beatles for themselves. At the same time, they also want to challenge John Lennon and Paul McCartney to see what other songs they could create. Yeah, that won't ruin the time stream...