Film / Give My Regards to Broad Street 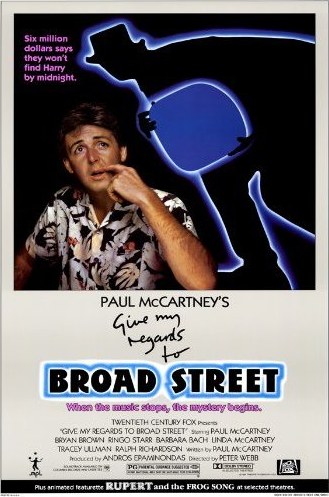 And the music never stops.
"It's going to be one of those days..."
Advertisement:

Give My Regards to Broad Street is a 1984 Comedy Musical, directed by Peter Webb, starring Paul McCartney, who also wrote the screenplay. And actually, since this was TV director Webb's first theatrical film, and Paul is famously a bit of a Control Freak, McCartney may well have directed a lot of it too.

McCartney's only significant live-action fictional acting role outside of The Beatles' movies, this might be considered the ultimate Vanity Project, as it was self-financed, the story is full of inside references to his life, and it's essentially a Jukebox Musical for his oeuvre, with re-recorded versions of songs from his entire career, including, controversially, six redone Beatles songs. It's a musical about an unusually bad Day in the Life of a character loosely based on Paul McCartney—but the story continually shifts through different levels of reality.

Critically panned on release (Roger Ebertnote who shared a birthdate with McCartney—June 18, 1942 gave it one star) and commercially invisible, the reputation of the film has been ameliorated for fans of his by time; acceptance of Paul's Cover Versions of Beatles songs — it was considered sacrilege in 1984, but we're used to it now — and slow recognition that, while it violates Willing Suspension of Disbelief for most human beings to behave like the protagonist does, it is in character for someone based on Paul McCartney. Even if the screenwriter (possibly) gets humanity in general wrong, he obviously had some insight when it came to writing a character loosely based on himself. Real Life incidents from the last decade or so suggest that he was closer to reality than he intended.

Oh, and Ringo Starr is in it too.