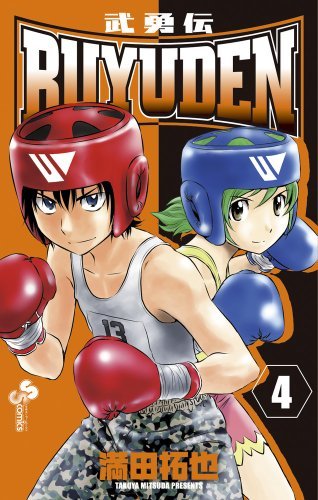 Buyuden is a sports manga by Takuya Mitsuda, which was serialized in Weekly Shonen Sunday from 2011 to 2014. The story revolves around elementary school kids entering the world of boxing.

Take Isamu is a 6th grader who looks down at his peers because he is the best at everything he does at school, from looks and smarts, to his luck with girls and his abilities as an athlete. He considers himself to be in the top percent of his age group and is incredibly bored with interacting with the so called normal people. A new student, Kaname Moka, transfers into his school and as she is fairly pretty, Isamu asks her out.

Moka mishears what he says and thinks he wants to challenge her, as she grew up boxing. In fact, Moka is an amazing fighter and can even take down 5 middle school boys at once. Although Isamu can’t stand her violent personality and she can’t stand him for having so much pride, they start to grow attracted to each other. But then Isamu finds out that not only is Moka more athletic than him from all her years of boxing, she's also much smarter than him. Will he able to get over his overly sensitive pride and dive into a romantic relationship?