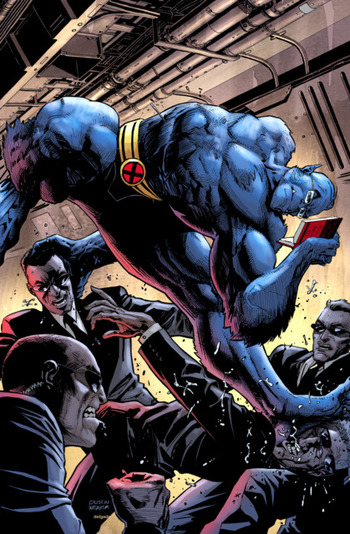 He could rip you to shreds and calculate the amount of said shreds there would be afterwards.
Solomon: Remember, Sol has a PhD.
GIR177: He's the living embodiment of the "buff guy typing on laptop" meme.
— YouTube commenters discussion, here

The Take a Third Option approach to Brains Versus Brawn that combines the two traits into one character, leaning more on the Brawn side than the Brains.

The opposite of Dumb Muscle. This guy has not only huge muscles and fists, but a very bright brain! Even if he's not a genius about fighting, he is otherwise the personification of Strong and Skilled. There is, however, a difference between "especially smart" and "not a total moron;" keep that in mind when adding examples. Here's a tip: A character who is strong but displays frankly average intelligence is simply not an idiot. But if said character constantly spouts technobabble and is considered an expert in some scientific field, that's especially smart. Similarly, if the bruisers are especially smart, they must also be unusually strong to qualify. "Beats people up" or "very physically fit" don't count.

The converse of the Badass Bookworm. In general, a Genius Bruiser looks huge and powerfully muscled, then unexpectedly shows off an intellectual side, whereas a Badass Bookworm looks like a standard geek, but then displays a surprising amount of physical prowess. Remember, in this case Muscles Are NOT Meaningless. The character does not need to look the part to qualify for this trope, though it's never a minus. If Authority Equals Asskicking, you may well end up with an Emperor Scientist. A Genius Bruiser is almost always also a Cultured Badass, but not necessarily. May fulfill the role of Brawn in a Brains and Brawn duo.

This trope is very much Truth in Television, and often the Foil for Jerk Jock. While the latter are over-represented in team sports, Genius Bruiser types often come from individual sports, such as track and field, gymnastics, fencing, skiing, swimming, or boxing. Compare Academic Athlete.

In fantasy, a Genius Bruiser is often a Magic Knight or a Mighty Glacier. This character also tends to be combined with Lightning Bruiser, as the speed is frequently tied into intelligence or very specific training. See also Minored In Ass Kicking and Smarter Than You Look. In a team specializing in brains, is The Big Guy (he is their Class 5) and if specializing in brawn, is The Smart Guy. Contrast with Shorter Means Smarter.

Not only is he a genius scientist, but he's capable of grappling with Murray, someone who he deemed stronger than the strongman in his old group. Considering he has an army of mutants of his own creation, it is likely he physically enhanced himself.

Not only is he a genius scientist, but he's capable of grappling with Murray, someone who he deemed stronger than the strongman in his old group. Considering he has an army of mutants of his own creation, it is likely he physically enhanced himself.