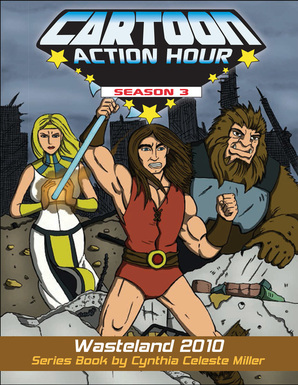 "The future is not bright."
Advertisement:

Wasteland 2010 is one of the series books from Cartoon Action Hour: Season 3.The book was written by CAH creator Cynthia Celeste Miller, and the series is a tribute to her favorite cartoon, Thundarr the Barbarian.

The premise: In 1981, a dimensional rift called "The Tear" opens over Earth, causing "The Changing", a series of disasters that turns the world into "an untamed planet of ruined cities, mutated creatures, man-eating plants and powerful magic." Fast forward to 2010: things are worse than ever, but the Utopian League, "an organization of scientists, civic leaders and scholars", is working to restore civilization. The League has several field agents who explore the post-apocalyptic world and deal with its many threats; the best of these are the team of Zolgar the barbarian, Lady Mistra the sorceress and Bogg the mutated Genius Bruiser. These three heroes travel the remnants of America, protecting the innocent from an endless variety of monsters and supervillains.

No direct relation to the video game Wasteland - while both are set After the End, the game is set after a nuclear war rather than the book's magical catastrophe.