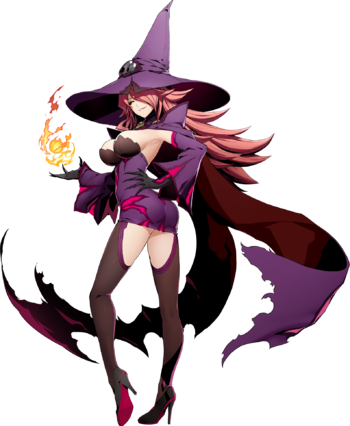 The fireball isn't the hottest thing in this picture.
"WITCH, n. (1) Any ugly and repulsive old woman, in a wicked league with the devil. (2) A beautiful and attractive young woman, in wickedness a league beyond the devil."
— Ambrose Bierce, The Devil's Dictionary
Advertisement:

This is what the Cute Witch often grows up to be, if she grows up, and if she doesn't lose her powers at a certain age. Whether a member of a Mage Species or an ordinary human, she is a Mysterious Woman with strange, magical, or seemingly magical powers, at least in the eyes of other characters or the audience. She also happens to be sexy or at least elegant. While the Wicked Witch is traditionally ugly on the outside and evil on the inside, she's the exact opposite, beautiful and charming. Because Beauty Equals Goodness, she's usually at least somewhat benevolent. If she's less than completely noble in her intentions, she'll be a Lovable Rogue or Affably Evil at worst. She might keep a black cat and a broom but rarely wears the full witch outfit. Usually, the Hot Witch either dresses in stylish ordinary or modern clothing, or else very revealing attire. In the latter case she's often presumed to be a sexy villain, but often turns out to be a Good Bad Girl instead.

The Hot Witch is not a Cute Witch. The Cute Witch is a Magical Girl who wears the stereotypical (or maybe just traditional) paraphernalia of witches and is cute in the "adorable" or Japanese kawaisa sense. She's also typically not yet out of her teens, or at least looks like it. When you see her, you think "Awwww". In contrast, the Hot Witch is attractive in a Western sexy, elegant, mysterious way. She's invariably in at least her later teens, if not her 20s or older. When fanboys see her, they will turn their heads after her.

The Hot Witch is usually not a Vain Sorceress or a Black Magician Girl, either. The Vain Sorceress is obsessed with using magic to maintain her beauty. If the Hot Witch uses magic to stay beautiful, it is not an obsession that clouds her ability to have other concerns. The Black Magician Girl's primary characteristic is the use of magic for offense and is usually an Action Girl. The Hot Witch's powers and personality are of a more subtle and mysterious nature. If they're using their magic to only appear beautiful to others, see Master of Illusion. If they actually change their own, usually ugly form to something beautiful to tempt someone, see Shapeshifting Seducer.

It should be noted that this trope is much Older Than They Think, given that the original descriptions of a witch were a young, attractive, and wise woman before it was changed to the ugly, evil hag much more commonly known today.

Contrast Wicked Witch. A subtrope of Witch Classic. Also, don't confuse this trope for another type of hot witch.