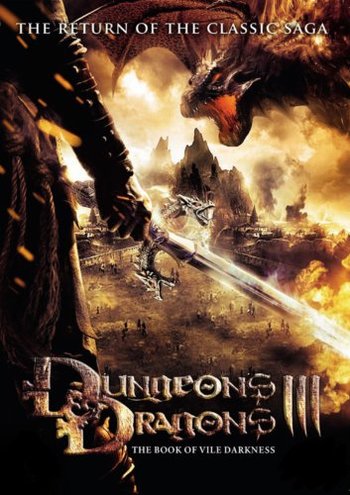 2000 years ago, Nhagruul the Foul, a sorcerer who reveled in corrupting the innocent and the spread of despair, neared the end of his mortal days and was dismayed. Consumed by hatred for the living, Nhagruul sold his soul to the demon Lords of the abyss so that his malign spirit would survive. In an excruciating ritual, Nhagruuls skin was flayed into pages, his bones hammered into a cover, and his diseased blood became the ink to pen the Book of Vile Darkness. All those exposed to the book were driven to madness or so corrupted by the wicked knowledge contained within that they had no choice but to turn evil. Misery and bloodshed followed the disciples of Nhagruul as they spread their Master's dark dream. Creatures vile and depraved rose from every pit and unclean barrow to partake in the fever of destruction.

The cities and kingdoms of Karkoth were consumed by this plague of evil until an order of warriors, the Knights of the New Sun arose from the ashes. The Knights swore an oath to resurrect hope in the land and the purity of their hearts was so great that Pelor, the God of Light, gave the Knights powerful amulets with which to channel his power. Transcendent with divine might, the Knights of the New Sun, pierced the shadow that had darkened the land for twelve hundred years and cast it asunder. The disciples of Nhagruul disassembled the book and bribed three greedy souls to hide the pieces until they could be retrieved. The ink was discovered and destroyed but, despite years of searching, the cover and pages were never found. Peace ruled the land for centuries and the Knights got lost in the light of their own glory, allowing their power as servants of Pelor to weaken.

800 years have passed since the last true Knight of the New Sun was able to use Pelor's power and a horde of Nhagruul disciples under the orders of Shathrax, the Mind Flayer, attacks and slaughters a current Knights of the New Sun group, abducting the father of the only survivor and newly knighted Grayson. Now alone, Grayson covertly infiltrates the team as they embark on a journey that would lead them to Shathrax and to his captured father.

Dungeons & Dragons: The Book of Vile Darkness provides examples of the following tropes: