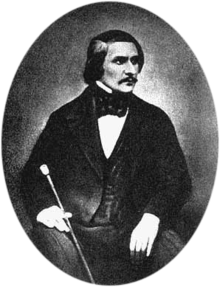 Nikolai Vasilievich Gogol (Russian: Никола́й Васи́льевич Го́голь, April 1, 1809–March 4, 1852) was a Russian-language writer of Ukrainian origins. Although his early works were heavily influenced by his Ukrainian heritage and upbringing, Gogol wrote in Russian and his works are disputed as belonging to either Ukrainian or Russian literature.

The novel Dead Souls (1842), the play Revizor (The Government Inspector or The Inspector General) (1836, 1842), and the short stories "The Overcoat" (1842) and "The Nose" (1835/36) count among his masterpieces. His works are highly allegorical and, especially in the case of his short stories like "The Overcoat" and "The Nose", are early examples of Magical Realism with Surrealist influences. Cossacks are major figures in several of works, including Taras Bulba and A Terrible Vengeance.

Works on the wiki: