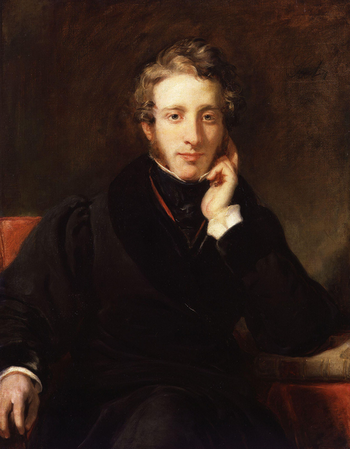 Edward Bulwer-Lytton (1803–1873) was a British author, poet, playwright, and politician. In his time, he was a critically respected best-selling author. He is famous for coining the phrases "The pen is mightier than the sword," "the almighty dollar," and "the great unwashed." One of his novels was later turned into an opera by Richard Wagner, and another became the first Western novel to be translated into Japanese. He was also a successful politician; he served as a Member of Parliament for a number of years, including a period as Secretary of State for the Colonies, during which he was instrumental in helping found the Crown colony of British Columbia, for which he is memorialized by the town of Lytton

. In 1866 he was elevated to the peerage for his services, as 1st Baron Lytton.
Advertisement:

Alas these days, the thing he is most likely to be remembered for is the line "It Was a Dark and Stormy Night," the full quote of which has been famously derided as a shameless example of Purple Prose. It inspired the Bulwer-Lytton Fiction Contest

. If he is remembered for a another thing, it is likely for telling his good friend Charles Dickens that Dickens should change the ending for Great Expectations, which Dickens subsequently did.

His more famous works include: