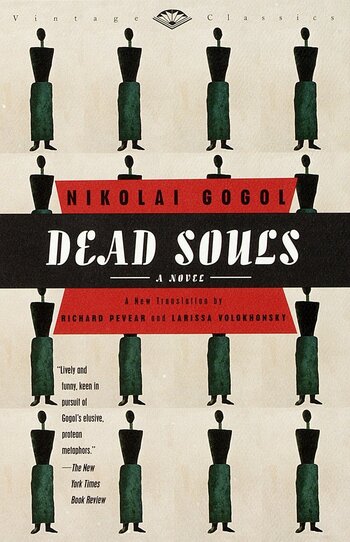 Dead Souls is the most famous novel by Russian author Nikolai Gogol. It tells the story of the ambitious guy Pavel Ivanovich Chichikov, who had an idea for a great scam.

Background explanation: In feudal Russia, major landowners had to pay a tax according to the number of serfs (measured as "souls") they owned. Said serfs were counted in special revisions, which happened rarely, sometimes less than once per decade. If during the time between two revisions some of these serfs happened to die, bad luck: their owners would still have to pay the tax as if they were alive. On the other hand, they could mortgage the estate, with souls included, to the Russian state. Now Chichikov adds two and two and gets the idea: If he buys up a lot of dead souls - which the squires probably want to get rid of - and mortgages them to the state, he'll make a fortune without hard work or risk. Well, that's the theory. In practice, the buying part alone becomes pretty hard due to the eccentricity of said squires.

Sadly, the book isn't finished, due to Creator Breakdown. What survives is the complete first volume of what was to be a trilogy, plus the beginning and end of the second. Many people have never even read the surviving parts of the second volume.

Not to confuse with Dark Souls or Yakuza: Dead Souls.