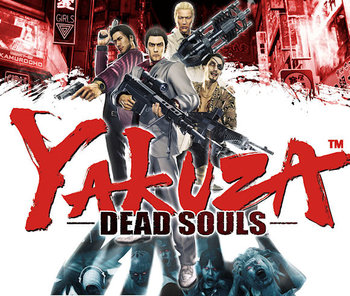 The legend of the Dragon of Dojima rises from the grave.
"Kamurocho is...it's dying...It's all falling apart!"
— Haruka Sawamura
Advertisement:

Yakuza: Dead Souls, released in Japan as Ryū ga Gotoku OF THE END, is a zombie-themed spin-off title of the Yakuza series. It was released in Japan on the PlayStation 3 in June of 2011, with a western release following in March of 2012.

Taking place a year after the end of Yakuza 4, the story of Dead Souls sees the city of Kamurocho face a dangerous new threat, one even greater than anything the Japanese underworld had ever seen before: the undead! With the city slowly falling apart as zombies ravage it and kill the innocent, four men tied to the criminal underbelly of Kamurocho set out to get to the bottom of the outbreak and save their city, and possibly the entire world.

Using a modified version of the engine from Yakuza 4, Dead Souls changes things up quite a bit by placing a greater emphasis on fighting with guns, with combat playing out in a fashion similar to third-person shooters and Survival Horror games. Heat actions return in a modified form called "Heat Snipe"; by firing a strategically placed shot at certain points in the surrounding environment, players can clear out large swaths of zombies with a single bullet. The ability to use environmental objects, a staple of the Yakuza series, is still present, but downplayed in favor of guns. The many sidequests and minigames emblematic of the series also make their return, but with a twist; many of the businesses of Kamurocho find themselves trapped within the quarantine zone, so players will need to fight off the zombie hordes and save the businesses before they can enjoy the arcades, restaurants, hostess clubs, and gambling dens of Kamurocho.

Sega released the game in North America in the hopes of riding the wave of the popular zombie trend that had been seen in games such as Left 4 Dead and Dead Rising. Unfortunately, the game wound up bombing, selling far fewer copies than anticipated and receiving a very average reception. So dismal was the failure of Dead Souls that it nearly ended support for the series in the west, with Sega of America pulling the plug on their English-language Yakuza websites and becoming quiet about any plans to localize future games. Thankfully, the series's presence in the west would remain thanks to Sony partnering with Sega to publish the next game in the series, Yakuza 5, and revitalizing interest in the series outside of Japan.

Not to be confused with Dead Souls by Nikolai Gogol, or Dark Souls.

Majima can't sing for beans, but he still has a lot of fun doing it.

Majima can't sing for beans, but he still has a lot of fun doing it.