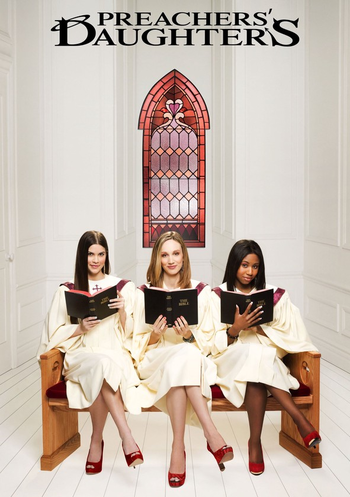 All children are individuals who exhibit good and bad behavior, regardless of what their parents do for a living.

If you're a preacher's kid in fiction, you're either a perfect little angel or—more commonly—a beastly little devil more devoted to mischief and/or promiscuity than any kind of religious study. Bonus points for being the latter while people think you're the former, an ability no doubt gained from your years of living under a household where learning to hide your extracurricular activities proves to be a tad bit more important than mathematics. It also is easy to be bad if your ordained parent is a Sinister Minister.

Of course, in actuality preacher's kids run the gamut in personality traits, but their screw ups tend to be far more public. Think about it: If you're the child of say, a chef, and you're caught doing something morally ambiguous or even downright illegal, well, how many people in your town would really care? (Even if you're a bad cook, people will merely consider it amusing.) But if you're a preacher's kid? Let's hope you didn't inhale. From the kid's perspective, it might be because everything is Forbidden Fruit. Making something morally off-limits only makes it more tempting for many kids to do. Worse, this tendency to magnify even the smallest infraction makes it easy to get started on the vicious Crime After Crime cycle with a very small initial offense.

In regard to such kids being portrayed as sexually promiscuous, compare Catholic Schoolgirls Rule.

Note that Roman Catholicnote More precisely Latin Rite priests, as like their Orthodox colleagues, Eastern Catholic priests are allowed to have gotten married prior to ordination, thus able to have children; the same applies to Latin rite priests with special dispensations or who were widowers upon studying for the priesthood. This does not appear much in media, though, because most Catholic priests are Latin Rite priests are supposed to be celibate (as opposed to most Protestant and Eastern Churches), so any examples from that denomination are going to be of necessity illegitimate. If the writer doesn't want to go down that route, one can either (a) substitute the Catholic for an Anglican (who are, in the words of the late Anglican Robin Williams "Catholic Lite") or (b) substitute a priest for a deacon (married Catholic men are allowed to become deacons—indeed, most deacons who aren't in training for the priesthood are married—and deacons are held to a similar standard of conduct as priests).

Subtrope of The Cobbler's Children Have No Shoes and Strict Parents Make Sneaky Kids (for the beastly kind). In fact, the beastly kind is so widely-recognized that an old saying goes, "Minister's kids, the devil's grandkids."

The film by this name, Preacher's Kid, exhibits a mixed case.