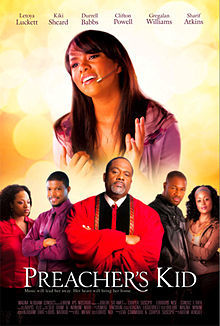 Preacher's Kid is a 2010 Christian drama film. LeToya Luckett plays Angie King, daughter of the bishop of an evangelical church in Augusta, GA. Her life has been devoted to singing for her church, and for keeping her father from falling apart by ensuring that he has everything that he needs. When she goes to a performance of a traveling gospel show, she falls for its star, Devlin (played by Durrell "Tank" Babbs), and is gradually seduced into a life of sex, violence, and drugs, all while she attempts to pursue her dream.