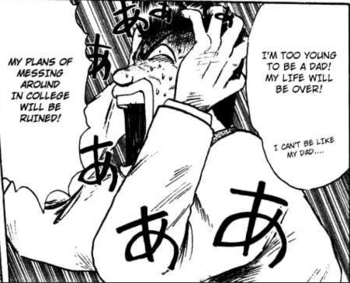 Yeah, I was foolish and wild
She was classic and regal
We we're fresh outta school
Both barely legal
We were young and on fire
And just couldn't wait
Six weeks in
She was three weeks late
— "Two Pink Lines", Eric Church
Advertisement:

A couple has had sex. They enjoyed it. There was an afterglow. In the heat of the moment, nobody considered condoms or birth control. Or maybe they did but were in a bit of a hurry. Or maybe there was a condom (see But We Used a Condom!).

Regardless, the woman announces her period is late, or starts every morning greeting John. Note that there are many reasons a period may be late or absent, ranging from menopause to diet or exercise programs to stress to health issues of various sorts, to just being late. But in this trope, she always jumps straight to "I'm pregnant".

She tells the guy who — in this trope — is almost never happy or ready to deal with this revelation that he may be about to be a father. They worry, they fret — separately or together — about what to do, and whether to consider abortion, adoption, keeping the baby, and what it will mean for their relationship in any of these instances. They agonize over the implications and whether they're ready to be parents. Will they be good ones? All the what ifs!

Then there's a pregnancy test — which comes up negative (or perhaps it was all some kind of huge misunderstanding). They are usually relieved, although there's sometimes a bittersweet mélange of disappointment that there will be no unexpected blessed event.

If she's actually pregnant, it's not a scare; that's another trope altogether.

Often occurs after a one-night stand or between two people not in a relationship. The version where it's the man who is freaking out about it is common too.

On many occasions, when there's a pregnancy scare, it leads to discussion about the guy getting a vasectomy. But the vasectomy episode is another plot completely.