Series / You Me Her 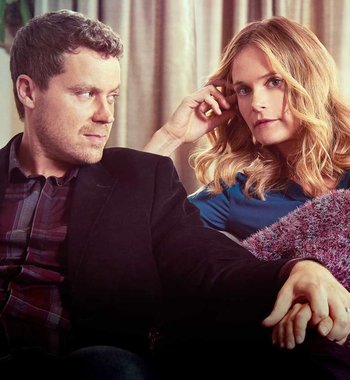 Jack and Emma. But wait... whose right hand is he holding?

You Me Her is an American live-action TV show about a married couple, Jack and Emma Trakarsky, who love each other but are seriously lacking spice. To get the mojo back, Jack decides to hire an escort (psychology grad student Isabelle "Izzy" Silva), but after she's left, he can't stop thinking about her. Then Emma finds out about it and demands an explanation, saying "I want to know everything that happened". Emma even sets out to meet the girl, with unexpected results. And a complicated Love Triangle ensues.

The show describes itself as TV's First Polyromantic Comedy, and indeed, does not shy away from romcom tropes—and sometimes lampshades them.