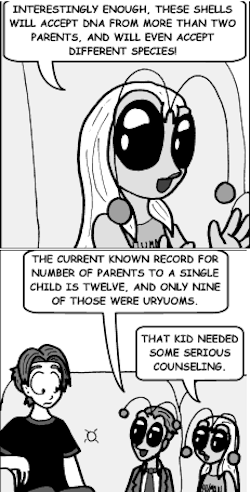 But hey, I'm sure this will never come up again, right?
Heimdall: Like my moms used to say—
Amir: Moms? Plural?
Heimdall: Yeah, I was born of nine mothers.
Amir: How.....?
Heimdall: Don’t ask. It’s a pain on Mother’s Day. Nine different phone calls. Nine flower bouquets. When I was a kid, trying to cook nine breakfasts-in-beds... oh, man!
— Magnus Chase and the Gods of Asgard: The Hammer of Thor
Advertisement:

A child is conceived, but instead of simply mixing one male sperm and one female ovum, a third set of genes becomes involved. Most often used in a Free-Love Future or as a result of Bizarre Alien Biology, a child turns out to be the genetic offspring of multiple people — except, it was natural conception. Perhaps we're dealing with aliens or supernatural beings and it's normal for them to conceive children this way. Or maybe, this was just some freak occurrence which took everybody by surprise. However it went down, Mass-Coitus Ensued and a baby happened. May be related to Polyamory or occur during A Party, Also Known as an Orgy. The situation may conceive An Aesop about such activities.