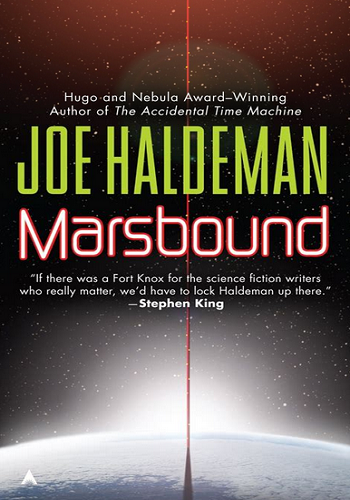 The Marsbound series is yet another realistic science fiction novel by American writer Joe Haldeman. Like his previous — and more famous — novel The Forever War, Marsbound effectively de-glamorizes space travel as it appears in softer works. Unlike The Forever War, Marsbound is written from the Point of View of an eighteen year old civilian girl, so the Everything Trying to Kill You elements that made The Forever War so tense and perilous are not as prolific. That is not to say that Marsbound is all sunshine and rainbows; there are plenty of things in the inner solar system that are trying to kill her.

As You Know: The story follows the life and adventures of Carmen Dula; who begins the story as an eighteen year old girl going on a friendly family road trip to mars (thus the name Marsbound). As such a trip might imply, you can't simply hop into the car and drive there, and space travel is still relatively new! Cue Time Skips, a Road Trip Romance, and the inevitable Space Ship Boredom.

Things don't get any better when they arrive on the Red Planet, either. The first thing that happens to the new arrivals when they get off the spaceplane is they're shuffled into a colony of 100 people that isn't much bigger than the spaceship they just got off of, assigned chores to do during their stay, and told to get used to it, bitch. A combination of menial labor, an Alpha Bitch (who happens to be the administrator in charge of the whole shebang), and the still inevitable Mars Colony Boredom drives the younger members of the colony to do something — eh, slightly inappropriate in the colony's brand new water supply.

Of course you Can't Get Away with Nuthin', and when the misguided youths are called out on their shenanigans. Actually, Carmen storms off into the martian landscape alone, and in the middle of the night, falls into a pit, and is left on the verge of death. The End. Don't look at me in that tone of voice! The Hero Dies, and this is the most anticlimactic novel of all time.

No, wait. Come Back!

When all hope looks lost, Carmen gets rescued... By a Martian! This sets forth a chain of events which have dire consequences for the rest of the human race, and calls into question the nature of humanity's place in the solar system.

The novel spawned two sequels: Starbound, and (the presently unwritten) Earthbound (which is, in no way whatsoever, related to EarthBound); the tropes of which are all included below: