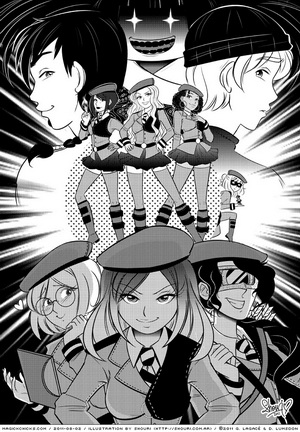 is a Spin-Off Webcomic of the series Eerie Cuties. The series focuses on three witches known as the Hellrune Coven: Melissa Hellrune, Jacqui Brightmoon, and Cerise Darkshade, who are "volunteered" to transfer to a new high school after the three were caught using (or at least trying to use) a forbidden magic artifact (you can read the story arc from the start here

Once there, they find that 1) It's an all-girls school, 2) while they were queen bees at their old school, this new setting has its own ruling party in the form of the student council who're more than willing to show the three "the ropes," 3) it's led by a very powerful esper who practically has the whole student body wrapped around her finger, and 4) it's a school for monster hunters, and they consider "witches" to be monsters.

To say the least, trying to regain their popularity is the least of their worries.

It's co-written by both Gisèle Lagacé (who originally did the art) and Dave Zero1, with inks (and other inputs) by Shouri. As of February '12, the full art duties had been picked up by Cassandra Wedeking, who had worked on Evil Diva, but duties returned to Shouri in May '14, leaving Cassandra to work only on Dangerously Chloe.

Ran from 2011 to 2015, ending around the same time Eerie Cuties finished up, though Gisele does some one shots in the same universe on occasions.