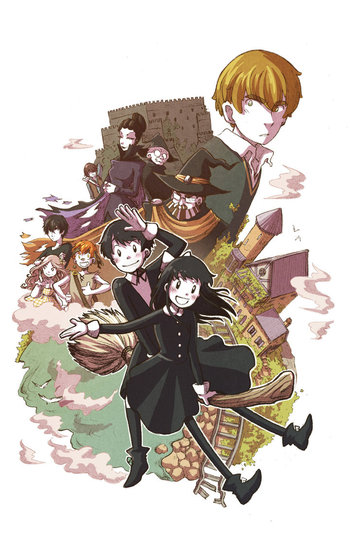 is a fantasy webcomic by Míriam Bonastre Tur about twins Dani and Dorian Wytte, who happen to be young witches. When Dani and Dorian miss the bus that was supposed to take them to their first day of magic school, they fear they'll be punished by their parents — so they decide to find a mentor to study with. After some searching, they eventually meet a soothsayer named Pendragon and decide to live with him to learn new skills in magic. As the story progresses, the Wytte twins are joined in their adventure by Nico, Monica, and Mark. Monica, the princess of the kingdom, is on a mission to rescue her betrothed William from evil witches who kidnapped him. Nico, Dani, and Dorian join Monica on this mission oblivious to the greater evils they will encounter along the way, which can only be described as a battle between good and evil.
Advertisement:

The series ran through 2015-2020. After it ended, the series got a physical book from Clarion Books in 2021, becoming one of the first series in Webtoons to do so. This had the consequence of the series archive being cut in half on Webtoons however (it only goes up to the 21 episode) in a effort to support the book.

See you next week! ❤