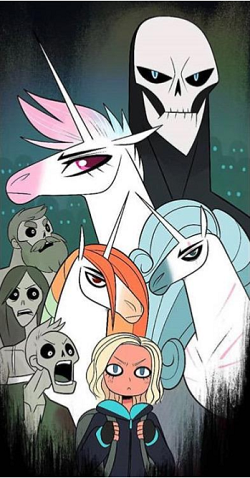 They are a zombie's worst nightmare. And they are adorable.
Advertisement:

Humanity, wobbling on its last legs following a zombie plague of unknown origin, finds itself reduced to a single refugee camp in Yellowstone National Park. Lacking in food, water, and manpower, the hopeless situation turned not-so-hopeless as unlikely salvation rode in on a pale horse. Or rather, it is the horses. Unicorns, in fact.

While the situation has stabilized, the war is far from won, and Yellowstone's tenuous sanctuary is threatened by a mysterious blight killing their remaining crops. Hoping to impress her Commander, Sergeant Glitter volunteers to scout nearby for food, but instead finds a single surviving human, Kate, who just might hold the key to ending their war for good.

Hooves of Death is a 2019 webcomic by Sam Bragg

, hosted on Webtoons. Updates every Friday. Read it here