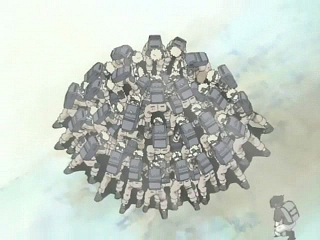 What are shadow clones for?
A large number of Mooks jump on the hero, pinning him down.
Advertisement:

Often, a bigger villain, such as the Big Bad or The Dragon, stands by and watches.

There are several ways that this scene can turn out:

In order to qualify as a Dog Pile of Doom, the hero should be completely covered in mooks. Just a couple of guys jumping on top of the hero is not enough to qualify. Have you ever dropped a piece of food on an anthill? It's something like that.

Differs from the glomp, because the glomp is a sign of affection (even though the victim might not like it). The Dog Pile of Doom is malicious, intended to kill or capture.

Often an Obligatory Joke whenever American football appears in fiction.

Technically, it doesn't have to be the hero at the bottom of the pile. A whole bunch of good guy civilian mooks jumping on the Big Bad would also count as a Dog Pile of Doom.