Emerging from the Shadows 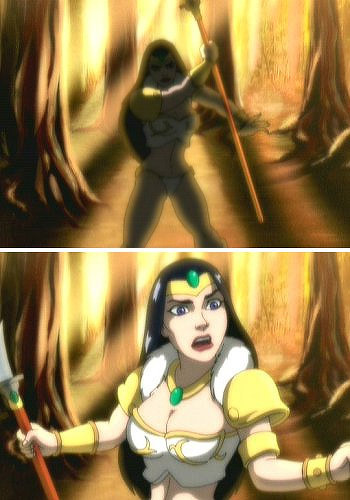 Thus we beheld the face of Morwyn Nerdbane!
"Sorry, this corner was really dark and I couldn't help myself. [beat] I think a bulb is out or something."
— Agent Phil Coulson, Agents of S.H.I.E.L.D., "Pilot"
Advertisement:

Someone's face, or whole body, is kept in shadows until just the right moment to come out and show his/her face to the other characters and/or the audience.

The duration of the shadow hiding can also vary. It could be just a few seconds, to spending several episodes not seeing this person.

And how much shadow there is can also vary. This can range from going into the only source of light in a dark area, to leaving the only shadow in a bright area.

Occasionally comically subverted by having someone cluelessly turn on the lights to reveal the darkness-shrouded figure.

A Sub-Trope of The Reveal, Chiaroscuro, Rule of Drama.

A Sister Trope to Lightning Reveal, The Unmasking.

Cozy is revealed to be not as sweet as she thought she was.

Alternative Title(s): Out Of The Shadows Reveal

Cozy is revealed to be not as sweet as she thought she was.