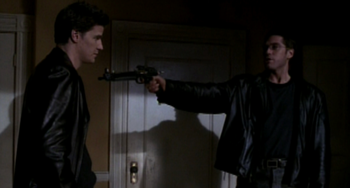 Angel goes to the Oracles to ask them to reverse time again so he can prevent Doyle's death, but they will not help him, citing that Doyle sacrificed himself to save Angel's life and that bringing him back would make the gesture pointless. Angel protests that Doyle, aside from being his friend, was also his only link to The Powers That Be. Cryptically, the Oracles tell Angel that when one door closes, another door opens, before imperiously waving him out of their realm. Meanwhile, in the real world, an unprepossessing demon runs frantically down an alley in broad daylight, trying to evade the pursuit of a mysterious, black-clad motorcycle rider. At Angel Investigations, Cordelia despondently seeks something tangible to keep in memory of Doyle. Angel tries to be understanding, but Cordy shies away from further discussion of her feelings, until her watch beeps a reminder that she is scheduled for an audition. When she opens the door to leave, the demon being chased by the motorcyclist is just coming in to ask Angel for help. Sending Cordelia on her way, Angel tries to ascertain whether he can help this demon, whose name is Barney, as well as whether he wants to. Proclaiming himself an empath demon, Barney admits he uses his ability to read people's emotions to get the edge at cards, or at the fights. Angel bluntly identifies Barney as a cheat and wonders whether the guy on the motorcycle might have good reason to be after him. Barney protests that, even though he's not perfect, he's not "evil" and can't imagine why this guy has tracked him across state after state. At her audition, Cordelia breaks down sobbing in the middle of her reading and then, when the three producers generously give her another try, suffers her first vision.

The man on the motorcycle continues to track the demon he's after, dismounting to examine more closely a viscous yellow fluid he finds on the corner of a building. Returning from her audition, Cordelia silently zeros in on an alert but essentially unprepared Angel, and kisses him with extreme thoroughness. Realizing that Doyle's kiss was the mechanism for passing his visions to her, Cordelia embarks on a kissing spree to rid herself of his unwanted "gift," unaware or uncaring that if she succeeds she'll foist the visions off on a truly hapless soul. After Cordelia amazes Angel and disgusts herself by kissing even (amazed) Barney, Angel leaves the empath demon under her care, with instructions to also try to sketch what she saw in her vision. As he checks out Barney's decidedly low-rent motel room, Angel is ambushed by the motorcycle man, revealed in the flickering light of the dark corridor to be armed with a crossbow. After shoving Angel further into the room and leveling his crossbow at the vampire's chest, the man reveals himself to be Wesley Wyndam-Pryce, Buffy's former Watcher. A little surprised and certainly unthreatened, Angel effortlessly disarms Wesley, who tells the vampire that he has quit the Council and is now a self-styled 'rogue demon hunter'. As Angel and Wesley compare notes on their overlapping cases, an enormous demon, oozing viscous yellow fluid, drops on them with a roar. Slinging Wesley against the wall with ease, the demon lands a few good punches on Angel, until Wesley shoots it with the crossbow he retrieves from the floor. To their surprise, the demon screams and crashes out the second story window to run away, limping and moaning, as fast as possible down the empty street.

Meanwhile at Angel's apartment, Cordelia tries to sketch the "ugly, gray, blobby thing" she saw in her vision. At loose ends, Barney attempts to engage Cordelia in conversation by offering sympathy for her grief, and immediately finds himself the target of her anger and suspicion. When Barney assures her he didn't mean to intrude, it is Cordelia who apologizes for her rudeness and, to make amends, opens up a little about Doyle. Just then, Angel comes downstairs, bringing the black-clad motorcycle rider with him. Barney runs and hides and Angel follows to reassure his timid client. Checking to see that Angel is out of sight, Cordelia slides into silent stalker mode, accosts Wesley, and kisses him. Not dumbfounded for long, Wesley pulls his old Sunnydale friend (whom he recognized immediately) into a tight clinch and (unlike Angel) kisses her back. Cordelia's focus is so intent that she only recognizes Wesley after exclaiming with disgust and disappointment that the visions are still with her. As Angel and Barney reenter the room, Wesley snaps back on task and disappears in the direction of Angel's library, only to reappear moments later having identified their opponent as a Kungai, a demon of Asian origin. The "rogue demon hunter" claims that continuing to track the Kungai is his job, or their job, if Angel insists, but Angel, still raw from losing his partner, orders Wesley to stay behind. Bribing the belligerent desk clerk (who seems to recognize Angel) to let him in back at the Lotus Spa (featuring Korean mineral baths), Angel finds the Kungai demon, but it is dying because the Tak horn on its forehead has been, literally, ripped off. Angel speaks Korean, apparently, but can't understand what the Kungai so urgently wants him to know. Back at Angel's apartment, Cordelia continues to sketch the object from her vision and, apparently feeling more herself, begins to complain about Doyle's "gift." With surprising insight, Barney gently chastens Cordelia, guessing that Doyle must have honored her with both his trust and his most valuable possession. While Cordelia makes coffee, Barney makes a call to his associate, Hank, and, dropping the timid, sensitive act, reveals that it is he who stole the horn from the Kungai demon. But, Barney tells Hank, he now has a line on something even more interesting—Cordelia's clairvoyant powers.

Wesley shows up at the spa and helps Angel by translating the Kungai's last words, which identify Barney as his murderer. At Angel's place, Barney permanently dispenses with his mild-mannered persona and starts to terrorize Cordelia. Physically overmatched by Barney's demon strength, Cordelia is unable to prevent him from tying her wrists behind her. Still, she fights back by pretending to get a vision and, in the demon's moment of distraction, kicks him squarely between the legs. Originally wishing to empathically savor Cordelia's fear, Barney has worked her into such a frenzied state that she now refuses to leave quietly. With mild regret for damaging merchandise (and with maybe a tinge of vengefulness), Barney knocks Cordelia unconscious with a punch to the jaw and takes her from the building. Returning to the empty apartment, Angel and Wesley both feel responsible for Cordelia's fate. As Angel hunts for clues, Wesley collapses in despair over losing yet another young woman from his care and finally admits that he didn't quit the Watcher's Council, but was fired for his total failure to control either of the slayers placed under his care. Angel, initially annoyed, now listens with more patience, even as he continues to comb the place for evidence. When Angel finds the crumpled drawing Cordelia made from her vision, he rotates the paper ninety degrees and recognizes it as the gray, blobby sculpture, "Maiden with Urn," by an artist with whom he's familiar. Finally getting a clue, he and Wesley both snap into research mode. Angel queries the web and finds that the sculpture is currently owned by a hotel chain with many establishments in the L.A. area. Wesley, having looked up the one Kungai phrase he hadn't been able to translate, finally figures out that "caller sale" means "auction." This gives the guys the last piece of the puzzle and, taking only moments to arm themselves, they race to Cordy's rescue.

Meanwhile, Cordelia wakes, bound and gagged, in a strange room where the only familiar object is the ugly, gray blobby thing from her vision—which she is looking at sideways because she's lying on her side on a settee. As she tries to get her bearings, Cordelia notices a long cloth-draped table covered with various grisly body parts and organs, dominated by a still-beating heart in a pedestaled bell jar. Hearing Barney talking with someone and approaching from the other room, she hastily closes her eyes and lays her head back down. To her consternation, they seem to be discussing whether to remove her eyes before or after the auction, as Barney's wild-eyed associate, Hank, obsessively clicks the extractor device over and over. The auction begins. The item for sale immediately before Cordelia's lot number comes up is the Tak horn from the hapless Kungai. Hank brings Cordelia to the podium, where she stands aghast while Barney opens the bidding for her lovely seer's eyes at $2,000. While Angel and Wesley zero in on her location, Cordelia buys time by inciting a bidding war between two patrons. When the contest proves lethal for one bidder and the matter seems settled at a substantial $20,000 (which has Barney practically hopping with glee), the representative from Wolfram & Hart suddenly bids $30,000. Barney nearly passes out, but manages to bang his gavel and close the deal before anything can interfere with such an unexpected windfall. Cordelia is now the evil law firm's property, and Angel and Wesley are nowhere to be seen.

The auction is over. Cordelia is in the back room listening to Barney negotiate with Mac, the lawyer from Wolfram & Hart, about the additional fee for removing her eyes, and to Hank still clacking the three-pronged extractor. To Cordelia's horror, Mac agrees to the extra grand and Barney, taking the extractor away from the seriously disappointed Hank, holds the seer down and starts to do the job himself. At that moment, a body comes flying through the curtained doorway and Angel and Wesley, who have worked their way from the front of the hotel to back here behind the Tulip Room, follow immediately after. Barney raps out, "Hank? Stakes!" and the fight is on. Mac, having already made a strategic exit, uses her cell phone to give a situation report as, behind her, Angel wades in, shouting to Wesley to get Cordelia. The hilarliously bumbling Wes manages to ungag her, but must use a claw that got knocked to the floor nearby to cut her bonds—because he can't get at the knife he earlier taped so securely to his leg. Just as Wes and Cordy head for the nearest exit, Barney blocks their path, the homicidal glint in his eyes matched by the righteous fury in Wesley's. In the ensuing struggle, Barney quickly gets the upper hand and starts to throttle the demon hunter who tracked him so relentlessly. With a shout, Cordelia grabs the Tak horn and stabs the murderous empath demon in the back. They watch in horrified fascination as the Tak horn's power drains his life force and his body shrivels and blackens and sinks away. Angel dispatches the last of his foes and, when an overjoyed Cordelia flings her arms around him, acknowledges Wesley's invaluable assistance.

Back at Angel's apartment, Cordelia sits at the kitchen table and frames her ugly, gray, blobby drawing as a memento for saving her life, and as a reminder that something of Doyle's will always be with them. Moved, Angel silently turns back to the stove and continues to scramble eggs, while Wesley finishes packing up his things. As Angel moves gracefully from stove to cupboard to table to stove, Wesley makes his farewells, wistfully drawing out his departure to give the other two ample opportunity to invite him to stay. When Angel finally relents and says, "Breakfast?", Wesley accepts with alacrity and the three friends enjoy each other's company for this moment of peace and warmth and safety.