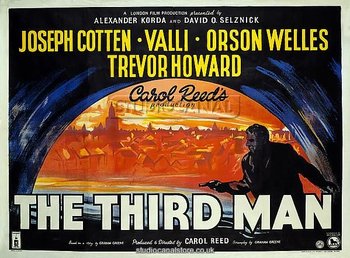 "Don't be so gloomy. After all, it's not that awful. You know what the fellow said: in Italy for thirty years under the Borgias they had warfare, terror, murder and bloodshed, but they produced Michelangelo, Leonardo da Vinci and the Renaissance. In Switzerland they had brotherly love, they had five hundred years of democracy and peace, and what did that produce? The cuckoo clock."note Cuckoo clocks were actually invented in the Black Forest (now in Baden-Württemberg, Germany). Sorry, Switzerland.
— Harry Lime
Advertisement:

Down-on-his-luck American writer Holly Martins (Cotten) arrives in postwar Vienna to meet with an Old Friend, Harry Lime (Welles), who has offered him a job. Unfortunately, the day Martins arrives, he finds out that Lime is dead.

Martins becomes entangled in a web of stories that make his pulp Westerns seem quaint in comparison. Investigating the death of his friend in order to clear his name from the selling of stolen and diluted penicillin he meets Lime's former love interest, a seemingly crooked cop, and a porter who has seen far too much. Martin's quest to clear the name of his friend drags him into dangerous territory and challenges his preconceived notions of good and evil.

The story takes many of the tropes commonly associated with Film Noir and plays with them. The film is also famous for its hypnotic music score by zitherist Anton Karas (whose title theme became a huge hit).

Led to the Radio Drama series The Lives of Harry Lime. Welles based his film Mr. Arkadin on one of the plots from that radio show.

Be warned that, due to the nature of this film, there are some unmarked spoilers below.

Calloway: "Be sensible, Martins.'
Martins: "I haven't got a sensible name, Calloway."
Feedback

Vienna was a city of bombed-out ruins, poverty, black marketeering, and military occupation.

Vienna was a city of bombed-out ruins, poverty, black marketeering, and military occupation.