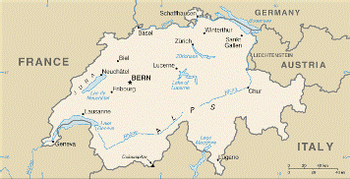 "In Italy, for thirty years under the Borgias, they had warfare, terror, murder, bloodshed — they produced Michelangelo, Leonardo da Vinci and the Renaissance. In Switzerland, they had brotherly love, they had five hundred years of democracy and peace, and what did that produce? The cuckoo clock."
— Harry Lime taking artistic license with history, The Third Man
Advertisement:

Switzerland (German: Schweiz, Italian: Svizzera, French: Suisse, Romansh: Svizra), officially known as the Swiss Confederation (Latin: Confoederatio Helvetica, which is why Swiss cars are distinguished by a CH sticker and the Swiss top level domain is .ch), is a Central/Western European country with four official languages (counting the very small Romansch-speaking population - the others are French, German and Italian), holds referenda all the time on many things and has not been involved in a war anywherenote Unless you count the short civil war of 1848 (the Sonderbundskrieg) that did not see any foreign involvement or spillover. Or an accidental invasion of Liechtenstein in 2007 when 170 Swiss soldiers on military exercises crossed the border without realizing it. Also, the country produced a huge number of mercenaries from about the late Middle Ages to the 18th century, specially during the Renaissance, and some wound up becoming the Papal guard, but they didn't fight in service of the country. since 1815. It's one of the richest countries (per capita) in the world.

One of the few countries in Western Europe not part of the EU, the others being the United Kingdom (although they were part of it until 2020), Monaco (though they do use the Euro) and Liechtenstein, although they often adopt EU regulations in the interest of trade. As a result, they still have their own currency, too. The Swiss also didn't join the United Nations until 2002, though the UN did have an office in Geneva long before then. In an interesting bit of trivia, the Swiss franc has recently become strong to the point of challenging the Euro, in part due to the debt issue. Though it has always been a very strong currency.

That's not really fair on the Swiss (they didn't even invent the cuckoo clock—it comes from Swabia in Germany, which in turn is a link to how the Swiss Confederation was founded), but they do have a strong tradition in making clocks. They also produced the Geneva Conventions and the International Committee of the Red C-Thing, among other things.note Besides the fact that the cuckoo clock was a far greater achievement than is thought. It is both a marvel of medieval craftsmanship and as a precursor to modern technology-one of the first machines. And it helped measure time with greater precision which certainly had many great effects. They also arguably influenced federalism, their system of government being one of several that inspired the writing of the US Constitution - and funnily enough they influenced the Australian Constitution as well.

There are actually two companies that produce MacGyver's favourite device for the Swiss military (who as usual refuse to play favourites between them, and split the order equally) — Victorinox ("The Original Swiss Army Knife") and Wenger ("The Genuine Swiss Army Knife"). The former now owns the latter, but the two brands remain. In addition to pocket-knives, Switzerland is famous for the production of finely-crafted mechanical watches by such brands as Breitling and Omega, and the country is also renowned the world over for making some of the finest milk chocolate anywhere, with modern milk chocolate and white chocolate in general originating from the country.

The Federal Charter of 1291 is one of the oldest surviving written documents of an alliance between Uri, Schwyz, and Unterwalden, the founding cantons of the Old Swiss Confederacy. These cantons were suspicious of Habsburg influence as the dynasty had home territories in what would become Switzerland, including the Aargau with Habsburg Castle (the very castle which gave the dynasty its name). These cantons were part of the Holy Roman Empire (and would remain so until the Peace of Westphalia in 1648, although they were highly autonomous after the Treaty of Basel in 1499). Under the reigns of Rudolf I and Albert I (the first two "Kings of Germany" from the Habsburgs), the cantons were heavily taxed as the monarchs fought to be crowned the Holy Roman Emperor. Neither succeeded, and when another struggle for the crown between Louis (Ludwig), Duke of Bavaria and the Habsburg Frederick the Fair began in the 1310s, the cantons knew who to support. In retaliation, Frederick's brother Leopold led a force to subdue the proto-Swiss alliance, but was decisively defeated at the battle of Morgarten in 1315. Over the next two centuries, the Confederacy steadily expanded. The original home territories of the Habsburgs were eventually lost later in the 14th century; the battle of Sempach in 1386 even killed the Habsburg Duke Leopold III. Habsburg Castle itself was finally lost to the Swiss in 1415.

The International Red Cross and Red Crescent Movement originates in Switzerland, being founded by a Swiss businessman horrified by the lack of basic battlefield medical care during the Austro-Sardinian War.

The movement, also responsible for the Geneva Conventions, is the most famous humanitarian organisation.

The symbols of the organisation are protected under the Geneva Conventions from any other use bar actual non-partial wartime medical provision, which means the ICRC tends to get rather annoyed when they're used as generic medical symbols. This is fairly frequent.

The Swiss Armed Forces (who actually have patrol boats) are a rather unique military. The Swiss military, as well as being pretty high-tech, is a trained militia, who keep their automatic rifles at home, though the ammunition is kept in military armories. Once people leave, they can keep the guns (as of recently, only until a certain age unless certain criteria are met), but they have to be rendered semi-auto only and a weapon acquisition permit is required.

Switzerland thus has a very high gun ownership rate, but you need a permit to buy weapons and ammo. In addition, concealed carry permits are issued sparingly and with several restrictions. The association of firearms with military service and professional training, along with these restrictions, means that despite having such high gun ownership, Switzerland has a rather low rate of gun crimes.

95% of Swiss have beds available for them in a nuclear bomb shelter, and new buildings were required to either include one or have access to a public one. Switzerland is rich like that. (And has a lot of stone mountainsides to dig into.)

In addition, the country also is said to defend, though no one ever signed a treaty, a mini-state in the form of Liechtenstein, which the Swiss tend to accidentally invade every so often due to navigation errors by soldiers on training exercises. Due to the country's small size, their military aircraft are also somewhat known for occasionally overshooting Swiss airspace into neighbouring countries, though it's much more a source of humour than it is of any international tension.

Switzerland is also famous for its tasty chocolate and Swiss Cheese. To a lesser extent, precision machinery, especially watches. With few natural resources, the country has always focused on importing raw materials, making high quality wares out of them and exporting the results.

The place is fairly easy to defend—with the exception of Basel (which is situated in the Rhine valley), Switzerland is surrounded by high mountains and a lake and the few tunnels can be easily closed in a war.

For a very long time in works of fiction, Switzerland was primarily referred to for its "Numbered Swiss Account", the favorite hiding place of illicit money. Switzerland no longer (as of 2005) protects the confidentiality of numbered accounts from other governments (at least the United States), though it still has control over the matter. This change in policy impacted the international pursuit of terrorists.

As of late however, Switzerland has increasingly become known for anonymous and secure data protection, protecting clients' digital information in a similar if updated manner to the old "Numbered Swiss Account".

Switzerland is famous for its love of direct democracy, holding frequent referenda on a wide variety of issues, including a highly controversial one that passed to ban minarets. This is also the main reason why Switzerland hasn't joined the EU, since the idea of giving up this direct means to influence politics didn't sit well with voters.

Due to Switzerland's permanently neutral status, they have not been in a war since 1815 (when Napoléon Bonaparte invaded the country). Neutrality also keeps Switzerland out of many international organizations; it refuses to join the European Union in part out of respect for its neutrality policynote In stark contrast to other historically neutral European states, such as Sweden, Finland (both of whom finally dropped the facade and applied to join NATO in 2022 in the wake of the Russian invasion of Ukraine), Ireland, and Austria, and refused to join the United Nations until 2002 despite hosting the European offices of many UN institutions.

Ironically, despite being by far the best-known example of a historically neutral country, Switzerland did not become the country with the longest record of neutrality until 2022, when Sweden ended itsnote dubious, since it was an EU member state, bound by treaty to support other EU member states militarily, making it a de facto alliance neutrality and applied to join NATO. Sweden had been officially neutral since 1814, one year before Switzerland. 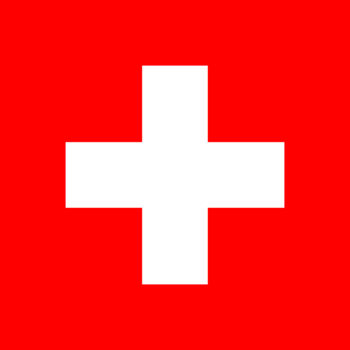 The white cross has been in use since the days of the Old Swiss Confederacy of the 14th century, though its exact origins are relatively unknown. The red field was first used in 1800 and was based on the banner of the Canton of Schwyz, one of the three founding cantons of Switzerland (along with Uri and Unterwalden) and de facto leader, thus giving the nation its name.
Coat of arms of Switzerland 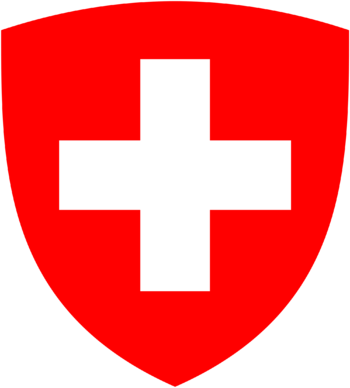