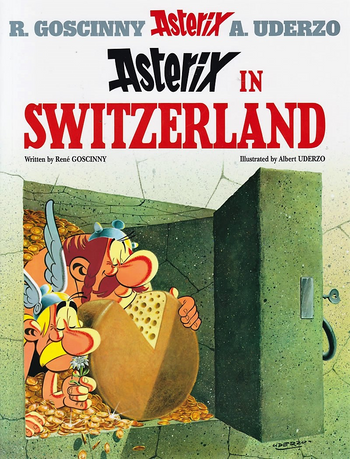 We open in the Gaulish village, where a miscommunication between Vitalstatistix and his shield bearers leads the irate chief to give them the sack and appoint Asterix and Obelix their replacements; the fact that their difference in height means they cannot hold him even close to level leads him to dismiss Asterix and have Obelix hold him on his own, as if he were serving drinks in an inn.

Meanwhile, local Roman governor Varius Flavus is spending most of the taxes, fines, and licence fees he collects from the locals on lavish orgies at his palace in Condatum (now called Rennes), but the suspiciously low sums he sends back to Rome are starting to attract suspicion, and Caesar sends a Quaestor (inspector) named Vexatius Sinusitus to investigate. Sinusitus asks for a bowl of vegetable soup before he goes to bed for the night, planning a thorough audit of Flavus' books for the next day, but Flavus poisons the soup, and Sinusitus is quickly taken gravely ill (not helped by Flavus' in-house doctors, a gaggle of argumentative quacks). Sinusitus gets rid of them by asking them to make an offering to Apollo so that he can secretly ask his bodyguard/driver to fetch the druid Getafix, whom Caesar has mentioned during his epileptic rantings.

Bound always to help the sick, Getafix goes to Sinusitus accompanied by Asterix and Obelix (who takes the instruction to "drop everything" literally, with unfortunate results for Vitalstatistix). He soon realises what has happened, though he keeps this detail from Flavus. Getafix can cure Sinusitus, but the cure requires the silver star (now known as the edelweiss), a rare flower that grows only at very high altitudes, and so the druid dispatches Asterix and Obelix to Helvetia (or Switzerland as we call it today) to find one. In the meantime, Sinusitus will go back to the Gaulish village, supposedly as a hostage to ensure Asterix and Obelix's safe return, but actually to get him away from Flavus and encourage Flavus to target Asterix instead. It works, giving Flavus an extra reason to want to stop Asterix, and he sends his deputy Caius Eucalyptus to Genava (now spelled Geneva), the capital of Helvetia, to ask the local governor Curius Odus (an old friend, and equally corrupt) for help.

Eucalyptus arrives in Genava ahead of the Gauls, and Odus sends orders to have them stopped at the border. However, the border guards make the unwise decision to accept Asterix's offer to "demonstrate" the contents of the gourd of magic potion Getafix gave him for the journey, and the two Gauls cut across country and swim across the lake known today as Lake Geneva at night to get into the city undetected. En route, they run into Malodorus Caseus, a friend of Odus' who was thrown into the lake for losing his bread three times at Odus' fondue orgy, and take rooms at a nearby inn.

Caseus' return to Odus' palace alerts him to the Gauls' presence in Genava, but the innkeeper, Petitsuix, covers for them when the Romans come knocking, and when they are gone, he wakes our heroes and persuades his banker friend, Zurix, to let them sleep in one of his safes overnight (after first opening an account attached to the safe). However, the Gauls are hungry, and Obelix smashes the door off the safe from inside so that they can ask Zurix for food; when the banker sees the smashed safe door, he is horrified, and even more horrified when Odus' legionaries come knocking. He quickly rushes them into another safe full of Egyptian souvenirs - which turns out to belong to the centurion leading the patrol at the door! The sight of the Gauls' smashed safe door prompts him to vow to return the next day to close his account, reducing Zurix to a sobbing wreck, but the Gauls have avoided capture again.

Petitsuix picks up the Gauls the next day and gives them each a Paper-Thin Disguise to make them look like locals on their way to perform their annual national service commitments. However, the Romans have set up roadblocks, and Caseus recognises the Gauls; Petitsuix leads them into the meeting of the International Conference of Tribal Chiefs, and they hide in the audience by pretending to be asleep (not even pretending, in Obelix's case), but this ruse only works for a few minutes, and soon they are on the run again - or on the swim again, as they jump back into the lake, followed closely by the Romans. The Gauls and Petitsuix are picked up by a group of Helvetians on their way to national service camp for some games, food, and drink, while the Romans report back to Odus, who has all available troops dispatched to the camp to get the Gauls, dead or alive.

As Petitsuix parts company with the Gauls and heads back to his inn, Asterix and Obelix are finally at the foot of the Swiss Alps, but cannot begin climbing until after the Helvetians have finished their sport, food, drink, and singing (yodelling, which initially horrifies Obelix so much that he jumps back into the lake and tries to swim away). Time is running short, however, so Obelix downs the cheese fondue without even bothering with bread, then empties an entire barrel of wine into his mouth and passes out drunk after five seconds of attempts at yodelling. With the Romans descending on the camp, Asterix and a group of Helvetians tie themselves to each other and to Obelix and begin climbing the mountain while the other Helvetians fend off the attacking Romans using the last of Asterix's potion mixed with more fondue cheese. An overeager legionary grabs the unconscious Obelix, but is pulled up and out of reach before his comrades can catch up with him, and ends up getting dragged up the mountainside, desperately trying to keep Obelix from waking up and alerting the others to his presence.

Asterix finally finds a silver star blooming near the top of the mountain, and after picking the flower, he and the Helvetians continue to the summit (where they finally discover the now thoroughly fed up legionary). Asterix begins to drag the still unconscious Obelix back down the other side of the mountain to Gaul, but Obelix slides under him, and Asterix ends up on a runaway toboggan ride atop his friend, knocking Odus' centurion flying when he tries to stop them (and making the Roman wish he was back in Egypt). When they get below the snowline and come to a stop in yet another lake, Obelix finally regains consciousness, and he and Asterix take the silver star back to their village.

Back in the Gaulish village, Varius Flavus arrives to pretend to be upset about Asterix and Obelix not getting back and the Gauls having to kill their hostage — at which point a fully-cured (and magic potion-strengthened) Sinusitus emerges from Getafix's hut and punches Flavus into the sky, telling him that, when he lands, he'll be thrown to the lions along with Curius Odus. Vitalstatistix, now being carried by Geriatrix and Fulliautomatix (and so still tilted at a 45-degree angle), gives Sinusitus the honour of being the first-ever Roman to join the Gauls at their traditional banquet. Obelix, meanwhile, gives Getafix his impression of Helvetia: "Flat."