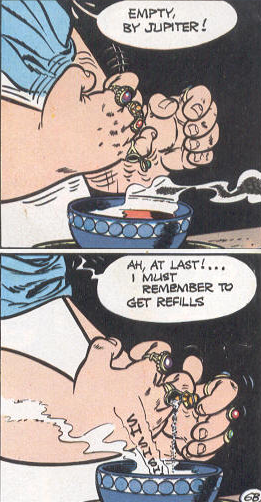 Many combat-oriented characters will have some concealed weapons on them. The Gun Nut will have holdout pistols, the Blade Enthusiast will build sheaths into all his clothes, and so on.

But how does a Master Poisoner keep his "supplies" on him? Often, it's with a Poison Ring — an elaborate ring with a hidden compartment just big enough for a stash of high-powered poison.

Most often, a Poison Ring holds a pellet or some powder that can be dumped into the victim's dinner. A subset of these rings overlaps with Poisoned Weapons, and inject the toxin by some means. A Poison Ring could also be used for cases where the victim is to be drugged instead of killed.

While rings are the most commonly used poison holder, any item of personal adornment can go here.

No connection at all to Rings of Death. Compare Cyanide Pill, where the poison is intended as a means of suicide to avoid being taken alive.