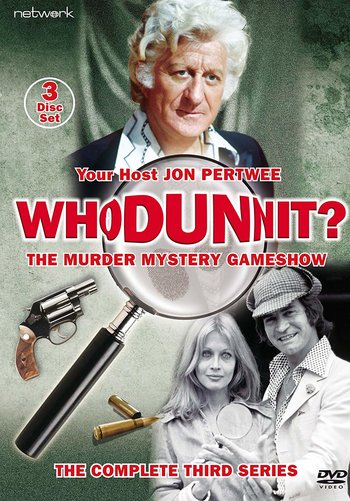 Whodunnit? was a British television game show that ran from 1972 to 1978. It was hosted by Shaw Taylor in the pilot episode, then by Edward Woodward in the first season, and Jon Pertwee from 1973 to 1978.

Each week it featured a short murder-mystery drama enacted in front of a panel of celebrity guests who then had to establish who the murderer was. Anouska Hempel and Patrick Mower became permanent panellists from series 3 onwards, with two guest celebrities each episode.note  Not coincidentally, Hempel and Mower were both appearing in TV crime dramas at the time they became Whodunnit? regulars, Hempel on the short-lived Zodiac and Mower on the longer-running Special Branch. In series 5, Liza Goddard replaced Anouska Hempel as a permanent panellist. The panel members could interview the remaining characters, with the only clue being that only the murderer could lie. Each panellist could also request to see a short replay of one section of the initial drama, which would often include events as they occurred and flashbacks as seen and narrated by individual suspects. (The video technology used at the time meant that it usually took a few minutes to set up each replay.)

It was created and written by comic actor Lance Percival and writer Jeremy Lloyd (co-creator of Are You Being Served?, 'Allo 'Allo! and so on) so there was a fair amount of comedy leveaning the murders.

An American adaptation briefly ran on NBC in 1979, hosted by Ed McMahon.

Tropes used in Whodunnit? include: