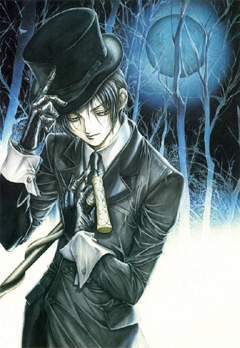 Count Cain is a Shoujo manga written by Kaori Yuki. Set in a dark Victorianesque world, the series centers around a young earl, Cain Hargreaves. Cain is seventeen, apparently orphaned, rich and eccentric. Unfortunately, his family past will allow him no peace.

Everybody in Cain's family, we are told, has a habit of studying poisons, and Cain is no different. With the aid of his trusted manservant Riff, he uses his knowledge of poisons to seek justice for murder victims, usually by poisoning the murderer. Both halves of the series (see below) begin with murder mystery short stories that Cain investigates before launching into longer storylines concerning issues close to Cain himself.

Like any good Crime and Punishment Series, Count Cain brings up just about every kink under the sun. It has gothic sensibilities, as well as bad steampunk science. Abusive Parents, Incest, and Magnificent Bastards are a staple. Blood, death, tragedy, and madness also abound.

The series was originally published in Hana to Yume and split into two halves, as the creator took a break to work on another series, Angel Sanctuary. The first part consists of four arcs collected in five volumes, entitled Count Cain. The second, done some years later, is eight volumes long and entitled Godchild.

The series provides examples of