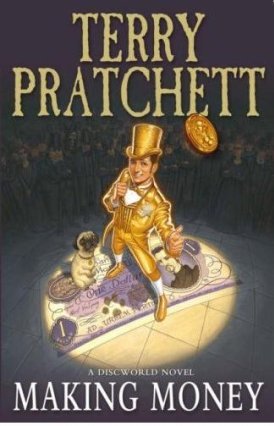 Moist: Why will anyone want to kill me?
Vetinari: I couldn't say, Mister Lipwig. But there was at least one attempt on your life when you were innocently delivering letters, so I expect your career in banking will be an exciting one.
Advertisement:

The 36th book in the Discworld series, Making Money returns us to Moist von Lipwig, who has taken to breaking into his own building and stealing his own possessions to alleviate the boredom of living a more virtuous life. Since Going Postal, he has become a major figure in the city and is tipped to become the next chairman of the Merchant's Guild. Vetinari, realizing that Moist would be much more useful if he redirected this bored energy towards a new project, offers him the chance to revamp the Royal Mint in much the same fashion as he revived the Post Office.

Topsy Lavish, the current majority shareholder of the Royal Bank of Ankh Morpork, spies Moist for what he is immediately — a dirty, scheming crook who she can certainly trust. Naturally, when she dies not long after meeting him, she leaves all of her shares to her pet dog... and leaves her pet dog to Moist. Her family, objecting to the bank falling into the hands of a non-relative, go to great lengths to bribe, torment and even attempt to kill Moist.

Meanwhile, Moist's fiancee Adora Belle Dearheart has been away on a dig, and Moist has been fighting off the advances of Gladys the golem. While both of these seem relatively innocent, they will eventually evolve into much bigger problems, which could cause Moist even bigger issues should things go wrong...

Preceded by Thud!, followed by Unseen Academicals. Preceded in the Moist series by Going Postal, followed by Raising Steam.