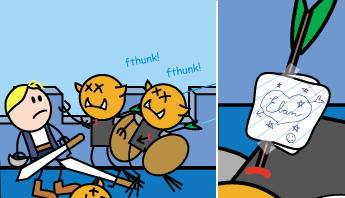 The William Tellegram, the first stepping stone of telecommunications.
"Message for you, sir!"
— Concorde (Lancelot's servant (after getting hit by one of these), Monty Python and the Holy Grail
Advertisement:

You're on one side of a medieval or fantasy battle or castle siege, and you want to deliver a message to someone on the opposing side. How to do it? Write your note on a scrap of paper, tie it to an arrow shaft, and have a friendly archer send it on its way. Bonus points if you hit an enemy mook on the receiving end or it's caught barehanded by the recipient.

If the note is wrapped around a brick or rock instead, and then tossed through a convenient window, it's Broken-Window Warning.