Film / Terry and the Pirates 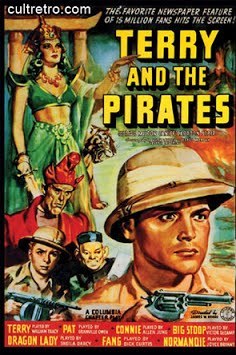 Terry and the Pirates is a 15-episode 1940 Film Serial produced by Columbia Pictures.

It is, obviously, based on the famous comic strip Terry and the Pirates. Dr. Herbert Lee is an archaeologist who is somewhere in the hinterlands of China, looking for a lost civilization. In this he is opposed by the "Dragon Lady", ruler of the natives in the interior. There's also the problem of Fang, the "half-caste" local warlord who is searching for the lost treasure of Mara, thought to be somewhere in the Dragon Lady's domain.

The story opens with Dr. Lee's teenaged son Terry (23-year-old William Tracy, who that same year played Pepi in The Shop Around the Corner), and Pat Ryan, Dr. Lee's colleague. They arrive in the village of Wingpoo to find a strangely hostile reception from the white people in the town. The only people who welcome them are Drake, the local plantation owner, and Drake's extremely good-looking daughter Normandie. It's soon revealed that all the other whites in the community—Stanton the radio operator, Harris the hotel clerk, the governor—are in cahoots with Fang. And Fang will stop at nothing to kill the intruders and get the treasure.

William Tracy also appeared in a 1953 TV miniseries version of Terry and the Pirates, playing a different part.