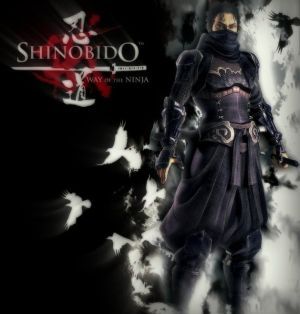 Shinobido: Imashime (Shinobido: Way of the Ninja in Europe) is a stealth-based video game set in old Japan developed by Acquire. It is something of a spiritual successor to the first two Tenchu games developed by Acquire themselves during a time when the Tenchu IP holders (Activision and later FromSoftware) decided to have other developers handle the later entries.
Advertisement:

It follows the story of Goh, the young and talented ninja from the Asuka clan, who suffers from a strange amnesia. Soon, he finds out that his clan was exterminated, with a few survivors, and the only chance of regaining his memory lies in some mysterious Purple Stones that contain fragments of his memory. In order to find them, he starts working for three powers (the Ichijo Clan, the Akame Clan and the Amurita Sect) in order to find all the purple fragments and find out what happened to him. He'll have to deal with rival clans, thick plots, two mysterious ninja who seem to know him well, and a masked evil sorcerer who's apparently after him.

Despite not being very well known, (probably because it was never released in the US), it's a very good, challenging game, with interesting characters and realism.

It has a spinoff on the PSP, titled Shinobido Homura ("Shinobido Tales of the Ninja" in Europe). It re-uses most assets from the original game and re-treads the same plot, though it's structured differently and technically does take place after the events of the original game.

A third game is available for the PlayStation Vita, titled Shinobido 2: Revenge of Zen.

After years of inactivity, Goh himself makes a return in, of all things, Neptunia x Senran Kagura: Ninja Wars, a Crossover between Senran Kagura and Neptunia, as a Guest Fighter and a woman.