Literature / Romance of the Three Kingdoms 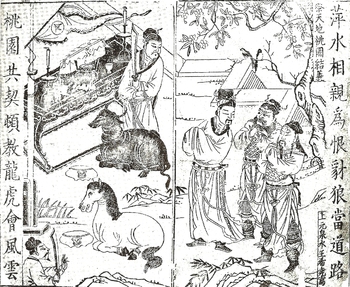 A Ming dynasty illustration of the Oath of the Peach Garden, one of the many fictional events described in the book.
"The empire, long divided, must unite; long united, must divide. Thus has it ever been."
Advertisement:

The Romance of the Three Kingdoms (Traditional: 三國演義; Simplified: 三国演义; Pinyin: Sānguó Yǎnyì) is a 14th-century Chinese epic novel about the century of war, turmoil, and bloodshed known as the Three Kingdoms Period (188-280 AD), written by Luo Guanzhong. It is considered one of the "Four Great Classical Novels" of Chinese literature

alongside Journey to the West, Water Margin, and Dream of the Red Chamber — and for good reason. This epic is renowned for its beautiful style, complex and heroic characters, and enduring motifs and themes that remain relevant even in modern society. It not only left its influence throughout the Chinese culture, language, and literature, but also that of other Sinosphere countries (i.e. Japan, Korea, and Vietnam), and has spawned many, many derivative works in various media (some more derivative than others) throughout the world.

The tale begins in the last days of the corrupt Han Dynasty, showing how the government and Emperor lost the "Mandate of Heaven" (天命), and the land fell into anarchy, with various warlords carving out their own territories in a struggle for supremacy. Gradually, out of the chaos, three kingdoms take shape: the kingdom of Shu, led by the virtuous Liu Bei (a distant cousin of the Emperor) and his sworn brothers, Guan Yu and Zhang Fei; the kingdom of Wei, led by the scheming Cao Cao; and the kingdom of Wu, led by the ambitious Sun family. All seek to unify the nation for one reason or another, and claim the right to rule for their own. And so the three kingdoms contend with one another over the century, and heroes rise and fall in the strife, until the nation is finally reunified.

And, as you'd expect from a pivotal work like this, it's managed to gather quite a collection of tropes. Interested tropers can find the full text of an older English translation, now in the public domain, here.

The site has added some annotations to help readers keep track of events and characters.

Tropes pertaining to the novel itself:

Tropes within the novel:

Alternative Title(s): The Romance Of The Three Kingdoms