Anime / Romance of the Three Kingdoms 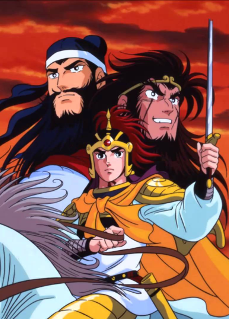 A 1991 anime series based off of Mitsuteru Yokoyama's manga adaption of the medieval Chinese literature of the same name.

The plot runs thus: The Han Dynasty is corrupt and crumbling into chaos. Evil cultist Zhang Jiao and his Yellow Turban armies are sweeping across the countryside burning, pillaging, and generally doing whatever it is that evil cultists do. Stepping up to the plate on the side of good are Liu Bei Xuande (the virtuous fresh-faced Kid Hero) and his sworn brothers, Guan Yu Yunchang (The Stoic Big Guy), and Zhang Fei Yide (the Boisterous Bruiser). Liu Bei tries to put together a volunteer army to bring peace to all of China, but unfortunately for him, there are are other factions in the neighborhood vying for power. These include the ambitious Sun family, and the sinister "survival by any means necessary" Warlord Cao Cao. Now if all this kind of sounds familiar to you, then you've probably played one of the many video games inspired by this story, namely the Romance of the Three Kingdoms strategy games or the Dynasty Warriors Hack and Slash battle games. (Notably, although the anime ends far earlier than both the novel and what the games cover, within that timeframe it actually hews to the novel itself a lot more than Dynasty Warriors does.) Or perhaps you've even read the original source novels this anime was based on

or a shorter summary of the story.