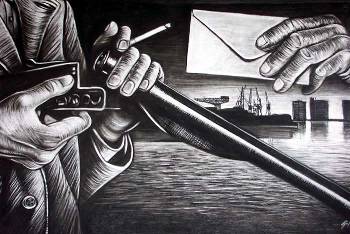 "Do you wanna know why I like killing the messenger? Because it sends a message."
— Damon Salvatore, The Vampire Diaries
Advertisement:

Is there a worse job to have than being a messenger for a major villain? The hours are long, the pay is low, your boss thinks that the world revolves around them, and likes to abuse their men for fun, and remember that dental plan that led you to join in the first place? Yeah, that got cancelled last year.

And then there's the very worst part of being a Big Bad's messenger: bring them a message with bad news, any bad news, (even just something small like that their mother is running 10 minutes late for the party) and they'll flip out, fly into a rage, and kill you. Why? Because you're the closest thing to them when they get the bad news, and you're expendable. Maybe it's time to see if the heroes need some extra help or a new sidekick, or... something. Anything!

The origin of the trope leads back to ancient Greece at least. One possible theory (besides the king being affected with Pride) is that the messenger was a defeated or losing general's son, and that his death was punishment for failure. It's also such a common cliché that the Evil Overlord List took time to specifically mention it.

By the way, remember when we told the worst part was bringing your master some bad news? We lied. The worst is bringing someone else a message from your master. Such as an ultimatum. The recipient is guaranteed to reply "Screw Your Ultimatum!" in a non-ambiguous way, and by "non-ambiguous", we mean by sending your head back. Also note that even the "good guys" might do this, especially Anti Heroes. Its depressing regularity in the ancient world led to the first rule of international law: Diplomatic Immunity. In the end, everyone (even Genghis Khan, who destroyed multiple empires) thought it was just a little unfair to the messengers. In fact, Genghis Khan wiped out one of those empires because they killed some of his messengers.

When villains do this, it is generally done as a subtrope of You Have Failed Me and Bearer of Bad News, and is a way to Kick the Dog by killing the person who annoys you despite their innocence. When heroes do this (to enemy diplomats, NEVER their own servants), it's because the messenger was a bad guy anyway, so why not murder him? Some shows make the messenger look and act particularly evil, e.g. threaten the characters with death or worse, to avoid the negative aspects of this trope (see also: "Ass" in Ambassador). He may even psychologically torment and provoke them by showing them what happened to those who said no. In particularly stupid moments, a villain might execute a messenger immediately for disturbing him, before he gets a chance to deliver his news.

And because of what we said earlier about how even anti-heroes may get in on the act, if you're in a story featuring Black-and-Grey Morality, do whatever it takes to get out of delivering a message. If you do wind up having to deliver some bad news or an ultimatum in such a work, your life expectancy is probably slightly shorter than that of a guy standing on top of skyscraper in a thunderstorm who's also saying "What's the worst that could happen?" Guys, the messengers are coming in peace.

Doing this may also be violating a tradition of Sacred Hospitality, which only adds to the sense of outrage it provokes; this played a role in Genghis Khan's destruction of the Khwarizmi, mentioned earlier.

"I'm just the messenger" is a stock phrase used to remind people that this trope isn't really fair, and is fairly likely to work.

Not to be confused with Please Shoot the Messenger, where the recipient is actively instructed by the message to kill the person who delivered it. Aggressive Negotiations may well include this trope as part of said "negotiations". Overlap with Offing the Annoyance is likely. Compare Offing the Mouth, which would be something like "Shoot the Deadpan Snarker". Contrast Mook Depletion, where the villain can only afford to have one messenger.

Compare: Shoot the Television and Spare a Messenger.

The adjutant to a Marshal of the Soviet Union chickens out of delivering a potentially embarrassing message when he becomes convinced that it would end with his demotion.

The adjutant to a Marshal of the Soviet Union chickens out of delivering a potentially embarrassing message when he becomes convinced that it would end with his demotion.