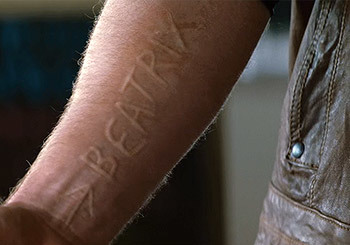 Want another way to help show what a Yandere, Stalker with a Crush, or how distressed/depressed a character is? Don't just have them hurt themselves or another person. Instead of having them create a random wound, make it a recognizable pattern. This could take the form of a word, letters, or a symbol. The mark chosen usually has some sort of symbolism, like the name of a crush, as way to show just how obsessive the person is. It may or may not leave a scar. Done to another person, then it is torture. If it is done to themselves, then it would be a Sub-Trope of Self-Harm, carrying a lot of the same ideas with added symbolism. Or they Couldn't Find a Pen.