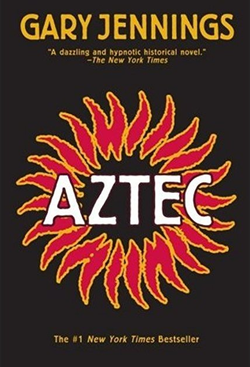 "Of all that I have possessed in my life, my memories are the only things remaining to me. Indeed, I believe that memories are the only real treasure any human can hope to hold always."
...And I concluded with the words I had heard in various languages everywhere:
"The Azteca were here, but they brought nothing with them, and they left nothing where they went."
— Mixtli
Advertisement:

Aztec is a 1980 historical fiction novel written by Gary Jennings. It is the highly lengthy life story of a noble Aztec (more properly Mexica) man named Mixtli, or "Dark Cloud." After the Spanish Conquest, Mixtli is asked by the Bishop of New Spain to tell his life story to a group of friars who are recording his story for the King of Spain. The novel is notable for being one of the first ever depictions in media of the Aztecs as heroes, rather than villains, though certainly there are plenty of both among the Mexica pre-Conquest. It is also notable for not shying away from graphic depictions of both sex and violence (and sometimes both at once), as might be expected from a society like that of the Mexica.

It was followed by two sequels by the original author, Aztec Autumn and Aztec Blood. The series was then continued after the author's death. Aztec Autumn follows the adventures of Mixtli's son Tenamaxtli as he attempts to get his revenge on the Spaniards.

The original novel provides examples of:

Here end the roads and the days.