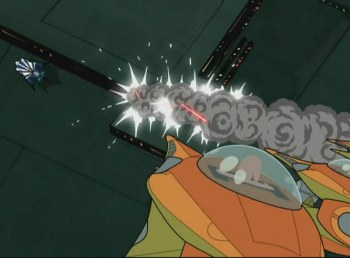 If only our computer brains could think ahead!
"You are defeated! Instead of shooting where I was, you should have shot at where I was going to be! Muwhahahahahahaha!"
— Lrrr, RULER of the planet Nintendu 64, Futurama
Advertisement:

The hero is running from the baddies. He is unarmed. The baddies are not. They proceed to shoot everything they have at him, but for some mysterious reason they can't manage to track his position fast enough or predict it, and as a result all bullets (and rockets, and laser beams, and...) hit juuuust where he was a moment ago without so much as scratching his clothes. Completely ridiculous, of course, since simple geometry dictates that swinging a gun a mere inch will result in the bullets hitting several metres ahead depending on distance, so the baddies must be moving their focus agonizingly slowly. You could argue that the baddies are bad at estimating the time the bullets take to travel, but even then, how long can this last before they decide they just have to swing the gun a slight bit further? And for ranges where the target can be seen clearly with the naked eye, the travel time of the bullets shouldn't matter significantly anyway.

This sometimes happens with armored vehicles as well, in which case it might be slightly more justified in that the turret might lack the capacity for fast tracking. That is, if the same turret wasn't shown rapidly swinging itself into position in a second just moments ago... then it's just dumb.

This sometimes happens to bad guys too, but it's generally more often seen with heroes, as they can't possibly be hit and shredded to bloody pulp in a shower of lead. When it does happen to baddies, the shooters usually manage to get their act together in the end.

You may also notice the tendency for Near Misses to be shown by the bullets hitting the ground just behind the hero's feet, even when the shooter does not have the sort of elevated position that would make it appropriate for all missed shots to immediately hit the ground. Admittedly, a spray of sparks/dust following the hero one step behind them is more dramatic than bullets just disappearing into the background, but it only adds to the absurdity of the scene.

This is even worse if you're shooting a laser, whose beam should be (but on TV, often isn't) effectively instantaneous over any range less than astronomical. And it's really silly if you're using Eye Beams — how do you miss the target you're looking at when the beams are coming directly out of your eyes?

A subtrope of Imperial Stormtrooper Marksmanship Academy and to Plot Armor in general.