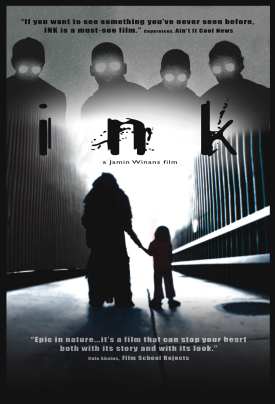 A 2009 low-budget indie fantasy film directed by Jamin Winans. When people go to sleep at night, certain beings come to them and give dreams. Storytellers supply happy images, while Incubi are evil creatures who give people nightmares and encourage vanity or despair in the individual. These creatures are both usually unseen by mortals and exist in a murky, dream-like mirror world of our own. However, neither of these creatures can directly influence the real world. It is implied that Incubi can indirectly influence certain individuals during the daytime, by building up their pride or tearing them down through whispers of despair.

The main story is centered around a little girl, Emma, who is abducted into the dream world by the namesake villain Ink. A group of Storytellers try to rescue her by bringing her separated father to her bed as her body lies in a coma. This involves one of the coolest chain reactions in film. (Which is no surprise, considering it's made by the same people who brought us Spin

The movie hit it big on bittorrent sites in early November 2009. The director squealed with glee. This reaction was the second admission by a film director or film producer that "unauthorized" downloads can be good for getting the word out for a work.

Can be watched online via Hulu here

, or purchased on GOG.com here