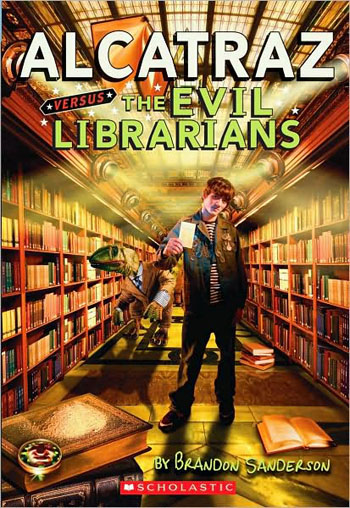 So, there I was, tied to an altar made from outdated encyclopedias, about to get sacrificed to the dark powers by a cult of evil Librarians.
— Opening line
Advertisement:

Alcatraz Smedry is an orphan who has been passed around the foster care system for his thirteen years of life due to his habit of breaking anything he touches. It's nothing intentional, it's just that things he touches have a tendency to fall apart. Door handles, pots, ovens ... one time he picked up a chicken, only for it to lose all its feathers and only eat cat food from then on.

On his 13th birthday, he receives a letter from his parents, bequeathing his inheritance to him: a bag of sand. The next day, Alcatraz's grandfather arrives (late, as usual) to take him on an adventure to recover the sands from his evil Librarian caseworker Ms. Fletcher.

You see, the world is much larger and stranger than we've been led to believe. One-quarter of the world is actually controlled by a cult of evil Librarians, who rewrite history in their conquered lands to remove things like strange powers, magical glass, and talking dinosaurs. Despite what they teach, most of the world is not ocean—those "empty spaces" on the map are actually the Free Kingdoms, which the Librarians keep hidden from the Hushlands. Australia is a recent Librarian acquisition, and Hawaii is an outlying island of the continent of Mokia, also recently conquered.

Alcatraz — as a Smedry — has a Talent. In his case, the Talent to break things. His grandfather is always late, his father can lose things, his uncle can lose himself, his cousins can trip, or wake up really ugly, or speak nonsense. All these are important and powerful Talents that they use to fight the Librarians and preserve the freedom of the world.

The Alcatraz series is a stand-alone series written by Brandon Sanderson, unconnected to his Cosmere. The series at present consists of five books:

Not to be confused with The Alcatraz (mostly). Or the television series Alcatraz.

Alternative Title(s): The Alcatraz Series, Alcatraz Versus The Evil Librarians