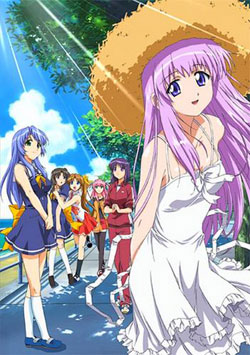 Lamune is a Visual Novel by Neko Neko Soft, adapted into a 12-episode anime in 2005.

The series has a summer theme to it, and the setting is crafted to reflect a small beach town in summer, right down to the sound of cicadas being prominently used. The series is named after a type of soft drink popular in Japan

, and also has a significant role in the anime.

All in all, it's a slow-paced anime, but is very sweet and filled with heartwarming moments.

No relation to NG Knight Lamune 40.