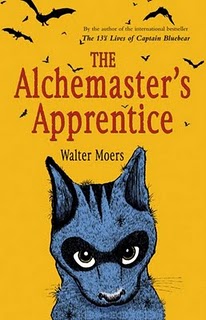 "A culinary ignoramus would have spat out a Sewer Dragon's knilch at once. It tastes extraordinary — like nothing else. Ordinary folk prefer familiar tastes — they'd sooner eat the same things all the time — but a gourmet would sample a fried park bench just to know how it tastes. It's the same with the alchemist: nothing strange, novel or surprising can deter him. On the contrary, he goes looking for such things. Are you ready for the next course?"
Advertisement:

The Alchemaster's Apprentice is a fantasy novel by German author Walter Moers, and the fifth book that takes place on the fictional continent of Zamonia (the previous four being The 13 ½ Lives of Captain Bluebear, Ensel and Krete, Rumo & His Miraculous Adventures and The City of Dreaming Books).

The story follows Echo, a Crat (which is basically a normal housecat, except for the facts that it can talk and has two livers) who, after his kindly owner dies, finds himself homeless and living on the streets in Malaisea, the sickest and unhealthiest town in all of Zamonia.

The main reason for Malaisea's ailments is Ghoolion, the town's chief alchemist, who one day chances to meet Echo and makes him the following offer: He will provide food, lodgings, entertainment and anything Echo's heart might desire for one month's time — after which he will kill him for his fat, which is a rare and potent alchemical ingredient. Driven by starvation, Echo reluctantly agrees to the bargain.

Over the course of the month, a sort of weird friendship grows between the two, and while Echo is provided with all kinds of gourmet foods and every imaginable comfort, he tries to find a way to get out of the bargain so he won't have to die after all. Along the way, he makes many discoveries and learns many secrets, and even makes a few new friends, such as Theodore T. Theodore, the Tuwituwu (a one-eyed owl) and Izanuela, the last Uggly in Malaisea.