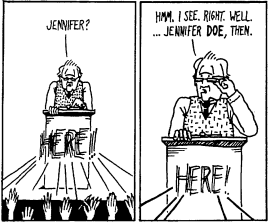 Marklar Leader: On the planet Marklar, we call every person, place or thing, "Marklar".
Kyle: Doesn't that get confusing?
Marklar Leader: No, not at all. Hey, Marklar!
One specific Marklar in a crowd of Marklar: Yes, Marklar?
Marklar Leader: You see?
— South Park: "Starvin' Marvin in Space"
Advertisement:

Sometimes, you just don't need names. Why bother remembering all those names? Just call everyone the same thing! This rarely seems to cause any confusion, at least for you. Outsiders, not so much.

Sometimes they'll also be Inexplicably Identical Individuals. Not only named the same, but they'll look the same too.

This tends to happen in Science Fiction and Fantasy, not so much in other genres, unless it's Played for Laughs (which many examples below are).

Opposite of the One-Steve Limit. Compare Identically Named Group, which is when everyone in a group has the same name, but the setting otherwise has diverse names. If a small number of people have the same name, and this is important to the plot in some way, that's a Significant Name Overlap. See also Pokémon Speak. Compare Race-Name Basis when the characters have names, but the race is used anyway. I Am Spartacus is when characters pretend this is the case. Often overlaps with Smurfing. Can serve as the logical conclusion of Planet of Hats.

Most certainly Truth in Television, as the Real Life section shows.