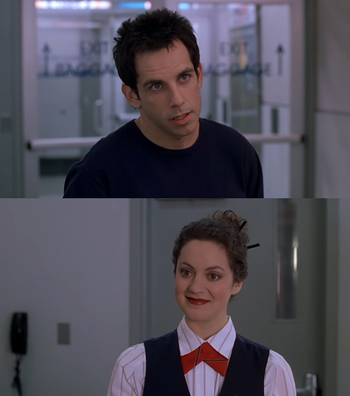 "Step aside, sir."
Clerk: May I see your rental agreement please?
Neal: [gritting his teeth] I threw it away!
Clerk: Oh boy...
Neal: Oh boy, what?
Clerk: [smirking] You're fucked.
— Planes, Trains and Automobiles
Advertisement:

Airports, train stations and bus stops can cause anyone to become frustrated, especially if you've been delayed or you're trying to change your booking. In this trope, protagonists are faced up against dutiful travel employees who seem to revel in their wickedness.

Examples of this trope typically involves our exhausted main character, travelling across the country to get home or to see their family. Often, there's a ticking clock element, where it's crucial they arrive somewhere at a certain time. In other instances of the trope, a character may be booking a trip via the phone or consulting with a travel agent. However, just as they thought they were on their way, they face the mean old transport company employee. They may dress nicely, they may be smiling so hard their cheeks might tear, but boy are they passive-aggressive. Perhaps years of facing embittered customers has made the employee more than a bit embittered themselves, or maybe, they picked the career purely so they could dictate other people's lives. Our protagonist usually makes a big scene, calling the worker out for their behaviour. But I mean, only one person is getting paid for being there, right? Why does the protagonist's goal matter more than any of the other impatient customers' goals? Scenes with this trope can sometimes end with the worker calling security, or may even lead to a "Stuck at the Airport" Plot.