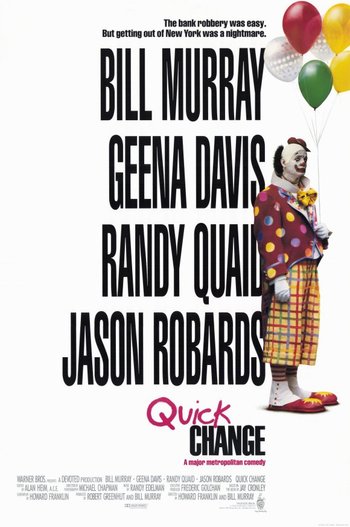 Quick Change is a 1990 comedy film based on the novel by Jay Cronley, starring Bill Murray, co-directed by Murray and Howard Franklin.

Murray stars as Grimm, a burnt-out New Yorker, who conspires with his friends Phyllis (Geena Davis) and Loomis (Randy Quaid) to successfully pull off the ingenious robbery of a New York City bank. But then they find themselves relentlessly thwarted in their attempts to get to the airport and escape the country. Meanwhile, the dogged veteran cop who takes charge of their case (Jason Robards) isn't having such a great day himself.

A con-artist does make a brief appearance, but he does not run the scam of the same name.

This is the second time Cronley's book was adapted as a film. In 1985, Hold-Up