Buses Are for Freaks 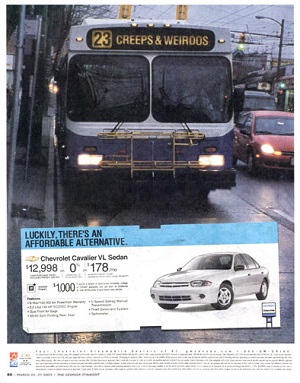 No Conflict of Interest here, folks!
Del: Ever travel by bus before?
Neal: No.
Del: Your mood's probably not going to improve much.
— Planes, Trains and Automobiles
Advertisement:

How does an author demonstrate that their character lacks the resources to use "proper" transportation such as planes, trains, or automobiles? Why, they get Put on a Bus (in the literal sense).

After the Great Depression in the United States, intercity bus ridership took off due to its relative affordability when compared to long-distance train travel. While the conversion of service to more affordable buses did help the private transit companies' bottom line, it was only a temporary relief; in the late 1960s and early 1970s, many private transit companies were folded into tax-supported publicly-operated systems.

As transit ridership decreased the public perceptions of customers changed dramatically. No longer was the typical transit rider likely to be your socially-equal neighbor; it was the weirdo who lost his eyesight in a shootout or the bum who is too lazy to get a job and become a "proper" member of American society. The popular image of The City during the late 20th century also contributed to how bus transportation was viewed; as cities tend to attract a disproportionate amount of people who stray from what society perceives as normal, and as transit ridership is highest in large cities, buses began to be perceived as full of "not normal" people.

A common variation on this trope is "leaving to make their fortune in the wide world", either by becoming a star or joining the military. It usually highlights the character getting on the bus as a wide-eyed naif who has no idea what the real world is like. If the medium is lighthearted, the naif will meet all the weirdos on the bus, and make friends or at least see them in as optimistic a light as possible. If the medium is more serious (or even Darker and Edgier), the naif will sit uneasily beside the oddballs or try to pretend they're not off-putting and unnerving.

Since the early 2000s, bus ridership, as well as the image of bus transportation, has increased positively. Compounding factors such as reinvestment in service, a newly-found focus on environmentalism, Millennials postponing getting their drivers license, as well as an aging baby boomer population reluctant to drive, have all contributed to increasing ridership. To some extent even intercity bus travel has shed its prior image; legacy operators like Greyhound as well as new entrants such as Megabus compete on factors such as internet availability and express routes that don't stop in every farming village with three people.

While buses are most commonly portrayed in a negative light, other modes of public transportation have been derided before. Additionally, this trope focuses on a US-centric viewpoint of public transportation; as for various reasons buses have historically been viewed in a more positive light in other nations, this trope tends to be downplayed or outright nonexistent in fiction originating from outside the United States.

This trope applies only if the character or surrounding transit ridership is portrayed as removed from the norm. A bus full of clean, professionally dressed office workers doesn't count for this trope.

See Subways Suck and Plane Awful Flight for similar tropes about other forms of transportation.