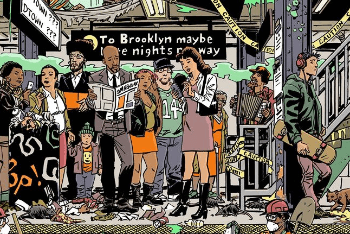 Betty Ross: The subway is probably quickest.
Bruce Banner: Me in a metal tube, deep underground with hundreds of people in the most aggressive city in the world?
Betty Ross: Right. Let's get a cab.
— The Incredible Hulk (2008)
Advertisement:

The message that many Sitcoms seem to send: subways (a.k.a. the Metro, the Underground) are always more trouble than they're worth. They're always breaking down and trapping characters inside for wacky, wacky antics or heart-felt learning and personal growth — in other words, you're Locked in a Room that just happens to have wheels, or trapped in a huge sideways elevator full of strangers. That's public transportation for you.

Combine this with the myriad problems with cars and you almost want to resort to going everywhere on foot, or on a bicycle. And don't even get us started on the Sinister Subway!

Could have something to do with where the entertainment is made —New York's subway is one of the oldest in the world and at various times has been so filthy as to get the nickname "The Electric Sewer", while L.A's subway (while the largest system in Southern Californianote For those who don't get the joke, the only other major metropolitan area in Southern California, San Diego, doesn't have a subway system, using trolleys and light rail instead) is either ignored or abused by media as a setting for geological disasters (though this seems to be turning around just as the real life subway is expanding at an astonishing rate - at least for the US).

Not to be confused as a Take That! to the sandwich chain Subway.

Real Life subways that don't suck include (but are not limited to) The London Underground, New York City Subway,note Though it used to suck in the past, it's better nowadays. Le Métro de Montréal, Le Métropolitain (in Paris), Moscow Metro, Washington Metronote Though recent years have called this status into question, pretty much every subway system in Japan as well as many other ones in Asia (mainly due to the benefit of being built more recently). See World Subways for details.

Compare Plane Awful Flight and Buses Are for Freaks.